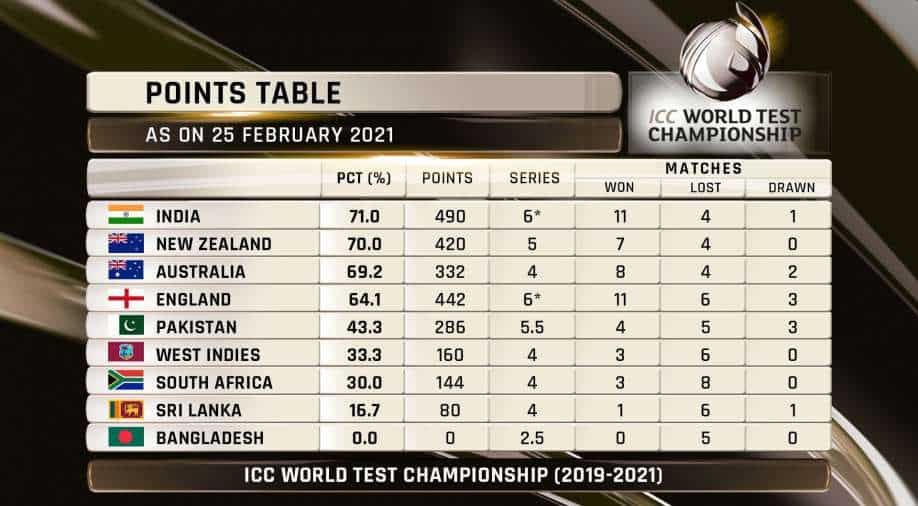 Team India toppled New Zealand and now have 71 percentage points. However, it is still not certain if India will face New Zealand for the WTC finals.

Team India handed England a 10-wicket on Day 2 of the pink-ball Test at the Narendra Modi Stadium on Thursday. With this win, India go on top of the World Test Championship points table.

Team India toppled New Zealand and now have 71 percentage points. However, it is still not certain if India will face New Zealand for the WTC finals.

If India win or draw the fourth Test against England, WTC final will be: India v New Zealand

If England win the fourth Test against India, WTC final will be: Australia v New Zealand

They now need to win or draw the last Test to book a place in the #WTC21 final 👀#INDvENG pic.twitter.com/FQcBTw6dj6

Having won the toss, England opted to bat first and India’s decision to play three spinners came to fruition as captain Virat Kohli handed the ball to Axar in the sixth over of Day 1. While Axar and Ashwin spun the web around the English batters, the crowd inside the Narendra Modi Cricket Stadium went abuzz.

Zak Crawley was the only batsman to achieve a half-century in the first innings, with the second-highest being 17 by Joe Root as England finished the innings with just 112 on board. Axar picked up six, Ashwin three and Ishant – playing his 100th Test – one.

With India’s innings starting during the twilight phase, England persisted with their three seamers. While the troika did trouble the Indian openers early on, Rohit Sharma went on to get his half-century. India’s batting line-up did suffer a collapse on Day 2, courtesy some fine bowling by Jack Leach and Joe Root – who picked up his first five-for in Test cricket – as India were bundled out for 145 runs, taking a 33 run lead.

With the sun out in Ahmedabad on Day 2 of the pink-ball Test, Ashwin and Axar bowled 30 overs in tandem and picked up nine wickets. Washington Sundar was given his first over of the match and the youngster scalped a wicket in his fourth delivery to bundle out England for just 81.

With a target of 49 on board, Indian openers Rohit Sharma and Shubman Gill played their strokes and finished the match in the third innings of Day 2.