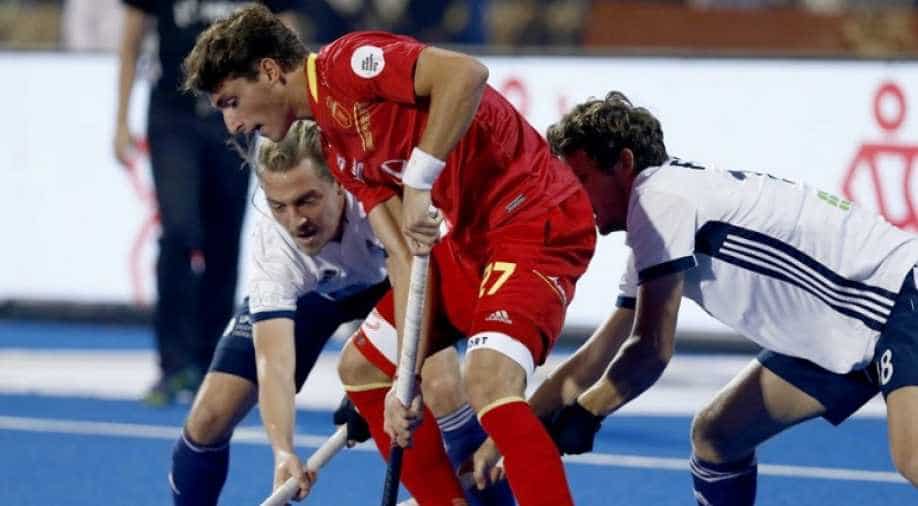 Players of Spain in action against France. Photograph:( Twitter )

The draw kept both the teams in the hunt for the knock-out round with one point apiece from two games.

Skipper and goalkeeper Quico Cortes' brilliant penalty stroke save helped Spain hold France in a  hard-fought 1-1 draw in their second Pool A match at the ongoing men's hockey World Cup on Monday.

The draw kept both the teams in the hunt for the knock-out round with one point apiece from two games.

It was a battle between world number 8 Spain and the 20th ranked France. It was France who stunned the Spaniards in the sixth minute when Timothee Clement scored from a field effort.

Spain came back strongly and restored parity in the 48th minute through Alvaro Iglesias' field strike.

France had a golden opportunity to register their first major upset of the tournament but the Spain skipper Cortes came to his side's rescue.

In the last 10 minutes, France were awarded a penalty stroke because of obstruction in front of the goal by a Spain defender after they went for video referral but Cortes made a brilliant save.

.@rfe_hockey & @FF_Hockey showcased valiant effort on the turf which ended as a hard-fought 1-1 draw. Here are the best moments captured from the match.

Spain had lost 3-4 to Olympic champions Argentina in their tournament opener, while France suffered a 1-2 defeat against New Zealand.

Spain will next play New Zealand in their final pool match on December 6, while France will be up against Argentina.

Hardik and Krunal Pandya's father passes away, Virat Kohli and others send condolences