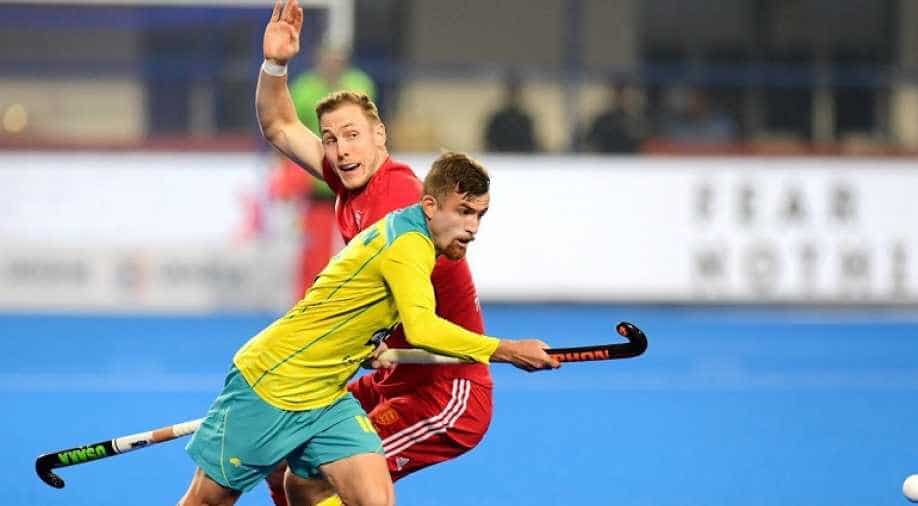 Hockey players of England and Australia in action during a game. Photograph:( Twitter )

The win took Australia to the top of Pool B with six points from two games.

Two-time defending champions Australia scored three goals in the fourth and final quarter to beat England by a comfortable 3-0 margin and register their second consecutive win in Pool B at the men's hockey World Cup on Tuesday.

The win took Australia to the top of Pool B with six points from two games and virtually secured their place in the quarterfinals of the 16-team event.  The Kookaburras had earlier defeated Ireland 2-1 in their tournament opener.

For England, the loss was a major setback after the 2-2 draw against debutants China in the opening game.

England got their first penalty corner a minute away from halftime but wasted the chance as both the teams failed to break the deadlock in the opening two quarters.

MOTM Matthew Swann says the @kookaburras have made their path to the Quarter Finals a lot easier, but the team cannot afford to get complacent at a high-profile tournament like the OHMWC Bhubaneswar 2018.#IndiaKaGame #HWC2018 #DilHockey pic.twitter.com/YWEQNtAZz5

Australia will play China in their last pool match on December 7, while England will be up against neighbours Ireland.