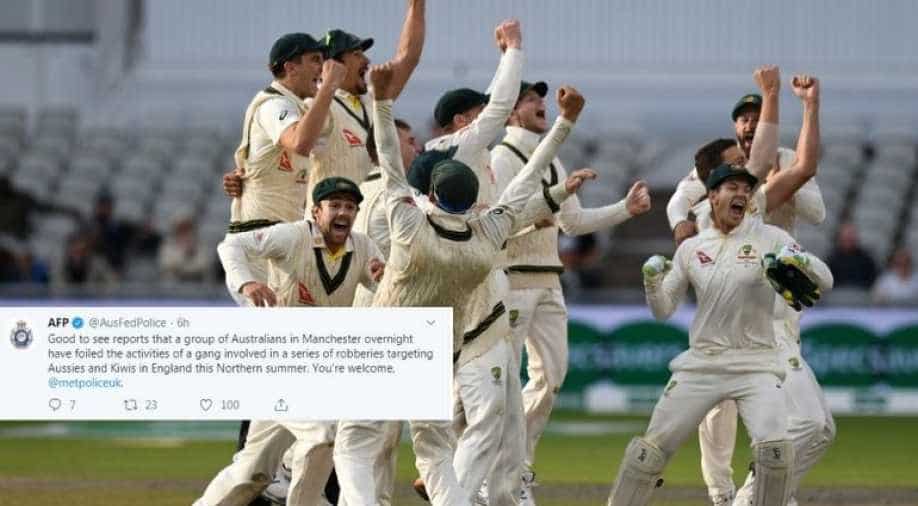 Australia and England have the oldest rivalry in cricket and fans of both countries have always been enthusiastic about voicing their opinions and as the team from Down Under retained the Ashes, Australian Federal Police (AFP) jumped on the bandwagon to mock the Three Lions.

Aussies defeated England by 185 runs in the fourth Test to retain the Ashes.

"Good to see reports that a group of Australians in Manchester overnight have foiled the activities of a gang involved in a series of robberies targeting Aussies and Kiwis in England this Northern summer. You're welcome, @metpoliceuk," AFP tweeted on Monday.

In another tweet, AFP mocked England all-rounder Ben Stokes, who originally hails from New Zealand. They also took a jibe at the Three Lion's first 50-over World Cup triumph.

England had won the World Cup after the boundary-countback rule came into play as both normal 50-overs and super over ended as a tie.

"This gang previously stole a valuable cup from the hands of some of our NZ neighbours in London, followed by one of their red-headed members attempting to wrestle an antique urn away from its rightful owners during a visit to Headingly," AFP tweeted.

They also mocked Ashes urn, tweeting "We are glad to see the urn is back where it belongs - even if the contents appear to be badly damaged by fire. Sorry @nzpolice, we understand that gang does not want to hand over the cup anytime soon".

The 30-year-old Steve Smith, who scored 82 runs in the second innings of the fourth Test of the ongoing Ashes on Saturday, has been having an exceptional series. He has amassed 671 runs and has become the second-fastest batsman to register 26 Test centuries.

We are glad to see the urn is back where it belongs – even if the contents appear to be badly damaged by fire. Sorry @nzpolice, we understand that gang does not want to hand over the cup anytime soon.

In the first innings of the match, he scored a double ton, enabling Australia to post 497 on the board.

In the second innings, Australia was in a spot of bother at 44/4, but Smith played a vital 82-run knock to enable the side to declare at 186/6, setting England a target of 383 runs.

Paine was able to contribute himself in the second innings as he scored a half-century. He has become the first captain to retain the Ashes in England since Steve Waugh in 2001.

In the final innings, England's wickets kept on falling at regular intervals but Australia had to toil hard to take the final two wickets.

England was finally bundled out for 197 in the fourth innings. Pat Cummins took the maximum number of wickets as he scalped four batsmen.

Currently, Australia has a 2-1 lead in the series with one match left to play.

England and Australia next face each other in the final Test, beginning September 12 at the Oval.