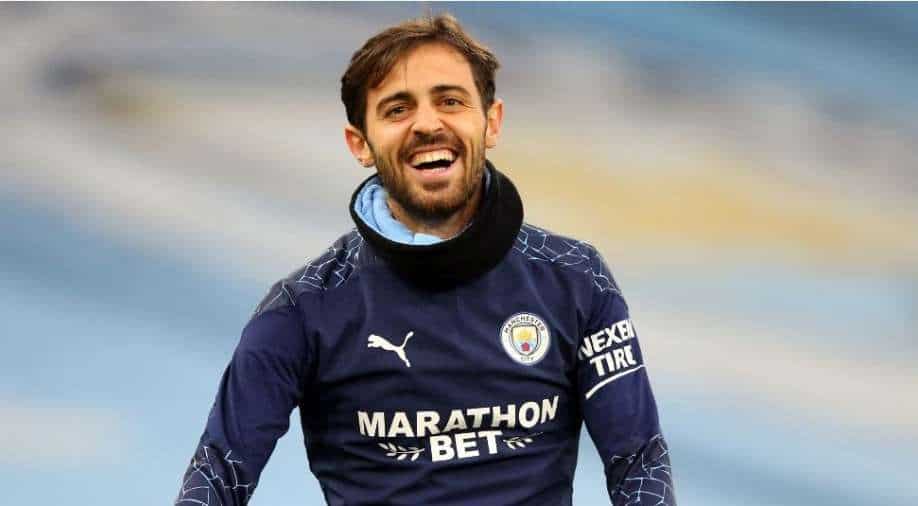 Manchester City manager Pep Guardiola on Tuesday heaped praise on Bernardo Silva as he said the Portuguese winger/attacking midfielder can play in any position, even holding midfielder, while lauding his intelligence and game-awareness.

Manchester City manager Pep Guardiola on Tuesday heaped praise on Bernardo Silva as he said the Portuguese winger/attacking midfielder can play in any position, even holding midfielder, while lauding his intelligence and game-awareness.

Bernardo, after a tough 2019-20 season, has shown glimpses of his previous self, where fans and pundits lauded him as one of the finest midfielders in the world. More than glimpses, it has been Bernardo’s consistency and versatility that has allowed Man City to perfectly execute their game-plan in many matches of the ongoing 2020-21 season.

“Bernardo Silva is so intelligent. He can play everywhere, even holding midfielder. He understands the game perfectly. He understands each position he has to play,” Guardiola said in the pre-match press conference.

Bernardo returned with a brace in Man City’s FA Cup match against Birmingham including a thumping left-footed volley which left Guardiola mighty impressed. The Portuguese has been working hard and has already played in various positions including right wing, left wing, forward and in different parts of midfield.

“I am incredibly delighted with the two goals because he is fighting to score,” Guardiola added.

Analysing Man City’s next opponent, Brighton, Guardiola said that the club is a delight to watch and a joy to analyse. He revealed that he has already warned the Man City players to be at a high standard if they want to beat Brighton.

“Brighton are a joy to watch. A joy to analyse. I said to the players today, we have to be at a high standard to beat them. Forget the results we had in the past - they are better in all departments. They create more than they conceded,” Guardiola said.

ALSO READ: Tottenham to play Fulham instead of Villa after virus issues

Man City will take on Brighton and Hove Albion on Wednesday with the Cityzens looking to climb the Premier League points table with their matches in hand.

F1 CEO opens up about Lewis Hamilton's future with Mercedes

Mohammed Siraj drives straight to his father's grave after landing in India, pays his last respects