Hats off to you! Shoaib Akhtar lauds Virat Kohli for congratulating Babar, Rizwan after Pakistan's win 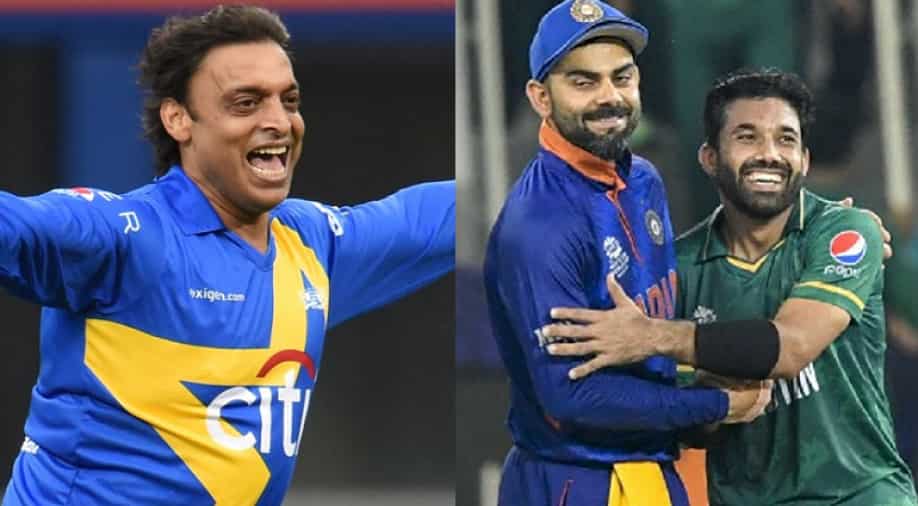 As the dust settles down after Pakistan's historic ten-wicket win over India in the ongoing T20 World Cup 2021, many have praised Team India skipper Virat Kohli for his classy gesture for Pakistan batters Babar Azam and Mohammad Rizan. Kohli was spotted hugging Rizwan and congratulating the duo for their match-winning partnership which helped Pakistan script a historic win against India in Dubai on October 24 (Sunday).

It was an emphatic performance from Pakistan, who outshone India with the bat and the ball to pull off a magnificent win. Pakistan restricted the Men in Blue on 151/7 after asking them to bat first in Dubai before Babar and Rizwan combined to chase down the target comfortably without any hiccups.

Post the game, Kohli was seen congratulating Rizwan and Babar before heading back towards the Indian dressing room. His gesture won hearts on social media with many praising him for the classy act. Former Pakistan pacer Shoaib Akhtar has also lauded the Indian skipper and called him a 'true sportsperson' for his classy gesture.

"True sports man & great human being @imVkohli hats off to you," Akhtar wrote in a tweet lauding Kohli.

True sports man & great human being @imVkohli hats off to you . pic.twitter.com/rIdkFGDw7R

Kohli had also credited the Pakistan side for their fantastic cricket in the clash and said they deserved to win the much-anticipated encounter between the two sides. "Credit where it's due and Pakistan outplayed us today," Kohli had said at the post-match presentation ceremony after Pakistan defeated India comprehensively.

Team India will be hoping to correct their mistakes and come up with a much better show with the bat and the ball when they take the field against New Zealand for their second game of the Super 12 stage on October 31. Following their meeting with the Kiwis, India will face Afghanistan in their third match.