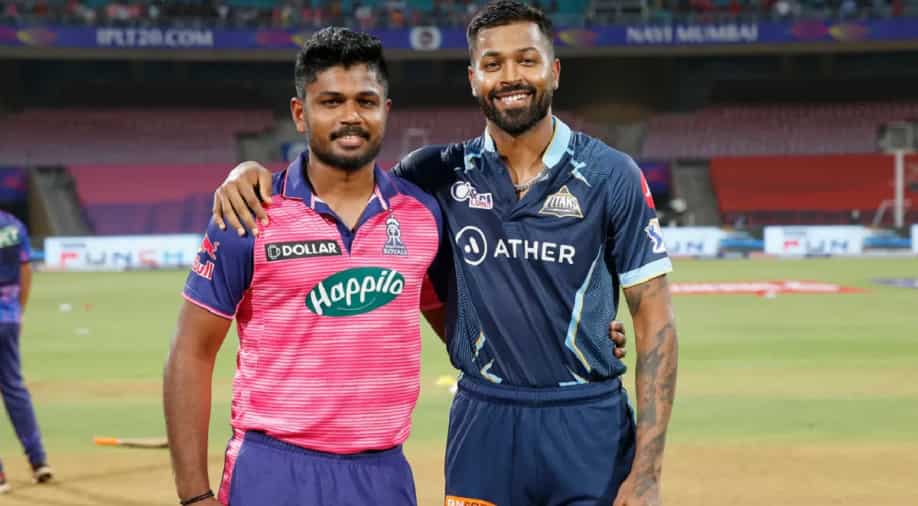 Rajasthan Royals will take on Gujarat Titans in the first Qualifier of IPL 2022. | Photo - IPL | Photograph:( Others )

Gujarat Titans and Rajasthan Royals will be aiming to secure a spot in the final when they lock horns with each other in Qualifier 1 of IPL 2022 on Tuesday (May 24). Here is our prediction for the game.

Indian Premier League (IPL) 2022 is all set to witness history as three teams are in the fray to become the new champions of the tournament. While Gujarat Titans (GT) and Lucknow Super Giants (LSG) are in the playoffs in their debut season in the league, Royal Challengers Bangalore (RCB) are still chasing their maiden IPL trophy despite having been part of the competition since the inception of the tournament in 2008.

Hardik Pandya-led Gujarat Titans have been the most consistent team in the tournament so far. Despite many believing they didn't have the squad to challenge for a spot in the playoffs in their debut season, GT have managed to punch above their weight and have won matches from improbable situation to finish on top of the table in the league stage.

Gujarat Titans lost only 4 out of 14 matches in the league stage to finish with an impressive 20 points and were the first team to qualify for the playoffs. They will be hoping to continue their winning run against the Royals at the Eden Gardens in Kolkata on Tuesday.

Rajasthan Royals too have been consistent so far this season and finished with 18 points from 14 games in the league stage. Their auction strategy paid off as their on-field performances improved vastly after the inclusion of the likes of Yuzvendra Chahal, R Ashwin, Shimron Hetmyer and Trent Boult in the side.

While Jos Buttler fired all cylinders in the first half of the season and looked unstoppable before losing his temp, Chahal has been among the wickets consistently and is a strong contender to win the Purple Cap. Skipper Sanju Samson has also let his bat do the talking and will be looking to lead the team from the front in the Qualifier 1 on Tuesday.

The loser of the first Qualifier will get a second shot at making it to the final as they will take on the winner of the Eliminator between Lucknow Super Giants and RCB in the second Qualifier.

Gujarat Titans will head into the first Qualifier as favourites having enjoyed a dominant run in the tournament so far. Hardik Pandya & Co. have impressed with their all-round performances this season and are expected to become the first team to make it to the playoffs on Tuesday.