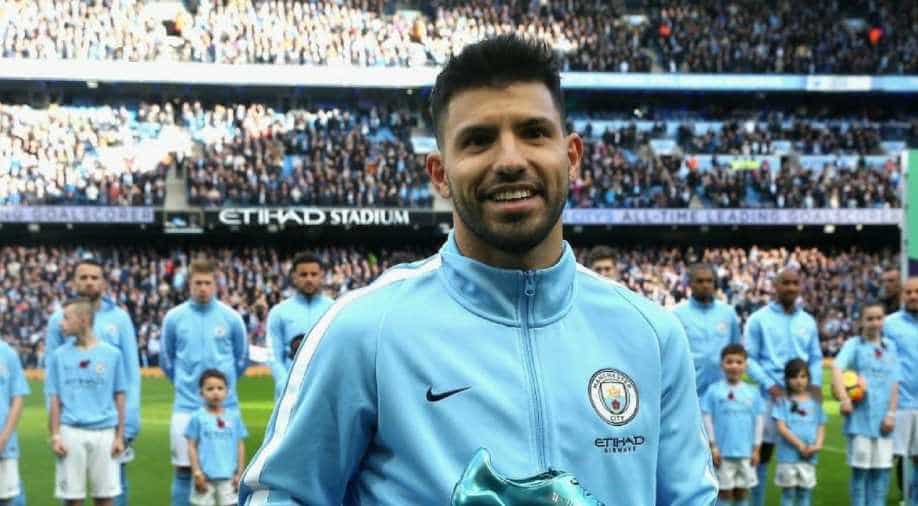 The 29-year-old Argentinian striker had been rumoured to be unhappy under Pep Guardiola. Photograph:( Twitter )

Sergio Aguero says he would like to see out his present contract with runaway Premier League leaders Manchester City which runs until 2020.

However, he looks set for a long run in the starting line-up with Brazil youngster Gabriel Jesus suffering a knee ligament injury in Sunday's 0-0 draw with Crystal Palace.

"I have until 2020, I think," said Aguero regarding his contract.

"The truth is that I hope to see out my contract and I'll try to do my best from here until the end of the season, and after that we will see what happens with me," added Aguero, who is City's all-time leading scorer and netted his 185th goal for the club in Tuesday's 3-1 win over Watford.

The 29-year-old Argentinian striker had been rumoured to be unhappy at not always being a first-choice starter.

Aguero has been with City since 2011 and memorably scored the goal that clinched the title on the last day of the season in 2012 at the expense of city rivals Manchester United.

He insists he would like to stay at the club but accepted that it was not ultimately his decision.

Seems hard to imagine them letting a player of his ability leave the etihad.pic.twitter.com/iQiMzuNJgQ

"The truth is I'm very happy here but, as always, as I said before, the club has the last word," said Aguero.

"They're the only ones who decide because obviously, the club is the one who makes the decisions, they are the ones who say you have to go or have to stay, so I'll respect whatever they tell me."

City manager Pep Guardiola appears content for him to stay as long as he wants given what he said in December.

"He is a legend," said Guardiola.

"He will decide absolutely everything about his life and his future. I'm delighted to have him here."

There were speculations that Argentine star is unhappy under Guardiola after being dropped for the Manchester derby last month.

He scored his 16th goal of the season in Tuesday’s 3-1 win against Watford.

Still, speculation over his future refuses to go away as Manchester City intent on signing Alexis Sanchez.