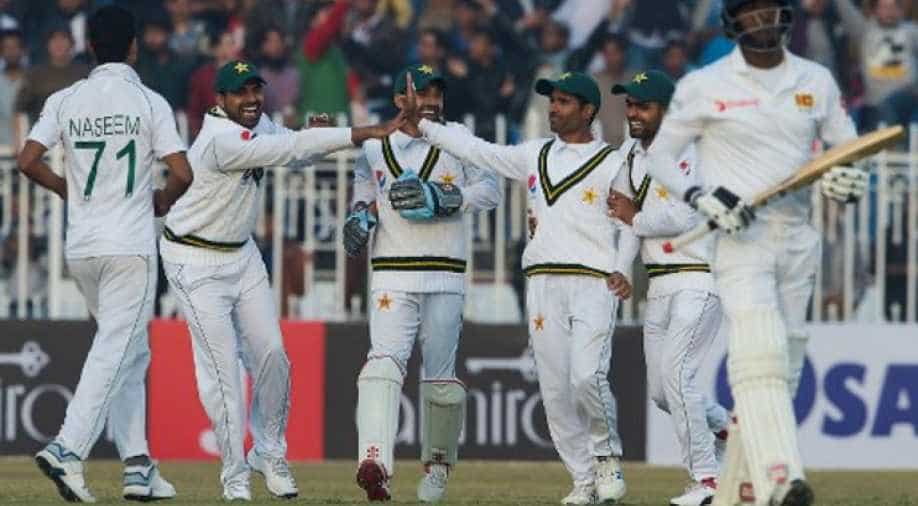 Dhananjaya De Silva and Niroshan Dickwella were at the crease when bad light forced an early end to the day's play with the visitors on 202-5.

Heavy security presence and overnight showers greeted the teams at the Rawalpindi stadium for the first Test match in Pakistan since the Lahore attacks of 2009.

Sri Lanka won the toss and opted to bat first despite the overcast conditions in a sparsely attended match with just 8,000 fans in the stadium. The islanders did brilliantly to blunt Pakistan's all-pace attack in the first session.

Lankan captain Dimuth Karunaratne and Oshada Fernando both survived close lbw shouts but were largely untroubled as they took their team to 89 for no loss at lunch.

However, all the hard work was undone in a nightmare second session as Shaheen Shah Afridi had Karunaratne lbw and 16-year-old pacer Naseem Shah then got Fernando to knick one to slip.

Debutant Usman Shinwari then dismissed Kusal Mendis for just 10 runs and Dinesh Chandimal followed soon after as Sri Lanka slid to 127 for 4.

Angelo Mathews and Dhanajaya de Silva then shared a dogged 62-run stand to begin the recovery but the youngster Naseem Shah struck again to remove Mathews for 31.

Dhananjaya De Silva and Niroshan Dickwella were at the crease when bad light forced an early end to the day's play with the visitors on 202-5.

Naseem said after the day's play that he was "happy to play the lead role".

"I enjoyed a lot and the whole crowd was supporting me," he said.

"Whenever I bowled a good delivery, they supported me. I was very excited that I was playing before the home crowd and got two wickets."

The second Test starts in Karachi from December 19.