Explained: Why was UEFA Champions League Round of 16 draw conducted twice? 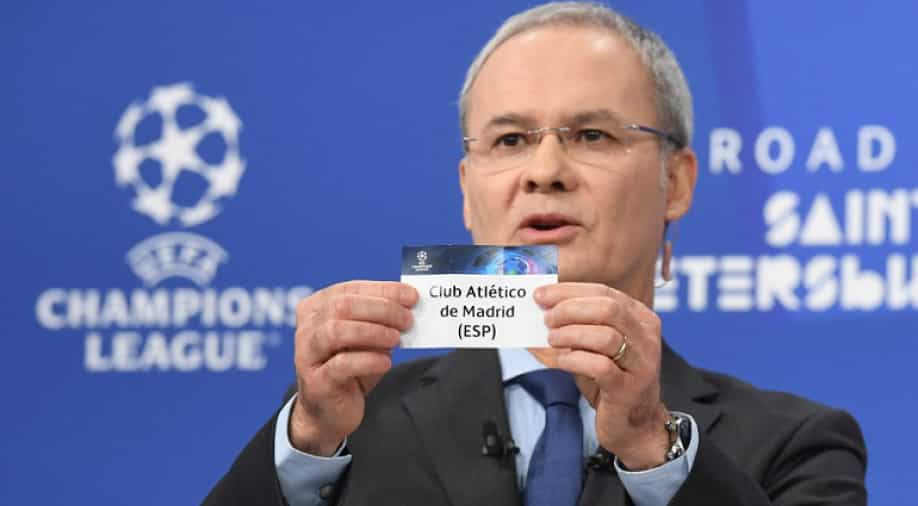 UEFA Champios League Round of 16 draw had to be reconducted on Monday. Photograph:( AFP )

UEFA Champions League Round of 16 draw for the 2021-22 season was redone on Monday after a technical error in the initial draw. Here is what happened exactly.

UEFA had to redo the Champions League Round of 16 draw for the ongoing season on Monday after a series of errors in the initial draw. Lionel Messi's Paris Saint-Germain (PSG) could have been up against Cristiano Ronaldo's Manchester United as per the first draw which was later deemed void by UEFA after the European football's governing body realised its mistake. The draw took place again as the final list of Round of 16 fixtures were revealed.

What went wrong in the first draw?

The Champions League Round of 16 draw started with Real Madrid getting drawn against Benfica for the first tie. However, confusion prevailed after Manchester United were mistakenly paired up against Villarreal. United couldn't have faced Villarreal in the Round of 16 as both teams were in the same group.

United, who topped Group F, should have been in contention to face Atletico Madrid, however, the ball with their name was not picked. The error went unnoticed as United ended up drawing against PSG, however, UEFA realised its mistake and reconducted the draw just hours later.

The video of the substantial error went viral on social media with fans talking about the same as UEFA was quickly forced into action.

| Manchester United’s ball for the draw was NOT included in the Atlético Madrid draw. pic.twitter.com/6YgvyYZ1vG

What did UEFA say?

UEFA was quick to release a statement on the matter and said there was a 'technical problem' due to the software of an external provider which led to the series of errors in the initial draw. Atletico Madrid had informed they took up the matter with UEFA following which the governing body's statement was released which also confirmed that the entire draw will be redone.

"Following a technical problem with the software of an external service provider that instructs the officials as to which teams are eligible to play each other, a material error occurred in the draw for the UEFA Champions League Round of 16. As a result of this, the draw has been declared void and will be entirely redone at 1500 CET," UEFA said in a statement.

Following a technical problem with the software of an external service provider that instructs the officials as to which teams are eligible to play each other, a material error occurred in the draw for the UEFA Champions League Round of 16.

What happened in the revised Champions League Round of 16 draw?

While Messi and Ronaldo's reunion was spoiled as the initial draw was declared void, the Argentinian legend's return to Santiago Bernabeu was confirmed as PSG were drawn against Real Madrid. Manchester United, who were initially pitted against PSG, will now face Atletico Madrid in the Round of 16. Defending champions Chelsea will face Lille while Liverpool and Manchester City will be up against Inter Miland and Sporting Lisbon respectively.

Here is the final Champions League Round of 16 draw: