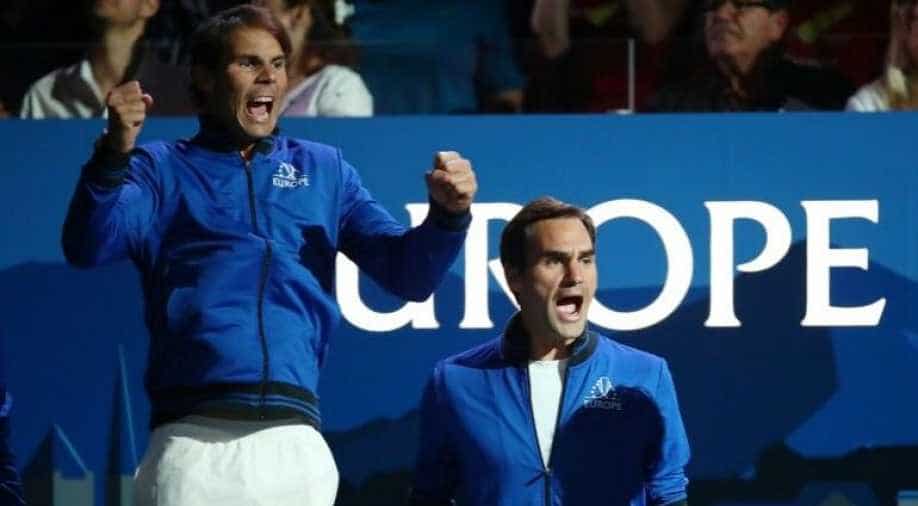 Greek Tsitsipas, ranked seventh in the world, kicked off the evening session with a 6-2 1-6 10-7 win over American Taylor Fritz, claiming the opening set in 24 minutes with two breaks of serve

Team Europe took a 3-1 lead over Team World on the first day of the Laver Cup after winning two of three singles matches and the doubles contest in front of a sellout crowd in Geneva on Friday.

Dominic Thiem and Stefanos Tsitsipas won their respective singles matches before Roger Federer and Alexander Zverev teamed up in the doubles, saving a whopping 15 of 16 break points to beat Jack Sock and Denis Shapovalov 6-3 7-5.

"All of us tennis players travel around the world for 10-11 months of the year," Federer said. "There's no place like playing at home so this is a very special night for me."

Greek Tsitsipas, ranked seventh in the world, kicked off the evening session with a 6-2 1-6 10-7 win over American Taylor Fritz, claiming the opening set in 24 minutes with two breaks of serve.

Although Fritz battled back in the second, winning six of the next seven games to level the score, Tsitsipas capitalised when Fritz double-faulted at 7-7 in the super tiebreak -- a race to 10 points when the match goes into a third set.

"I think the momentum changed in the third set tiebreak," Tsitsipas said. "I found my rhythm, had a more clear mind on the court, didn't rush so much. I think that played a crucial role in closing it at the end."

Thiem, ranked fifth in the world, needed only one break of serve to take the opening set, but the 20-year-old Shapovalov fought back to break twice in the second set to tie the game at one set apiece.

The young Canadian led 9-7 in the tiebreak before squandering his match points as Thiem clawed his way back to win the contest on his second match point.

"It's a really special thing with the tiebreak in the third," Thiem said. "It creates lots of close moments and match points on either side. It's also a little bit of luck at the end."

American Sock earned Team World their only point of the day after securing a 6-1 7-6(3) win over Italian Fabio Fognini.

Fognini failed to convert any of his six break points in the match as Sock won five games in a row to take the opening set.

Federer and Rafa Nadal, with a total of 39 Grand Slams between them, gave Fognini plenty of advice during breaks in play as the second set went with serve until the tiebreak.

But Sock came away victorious after Fognini double-faulted at 3-5 before the Italian made a backhand error to surrender the match.