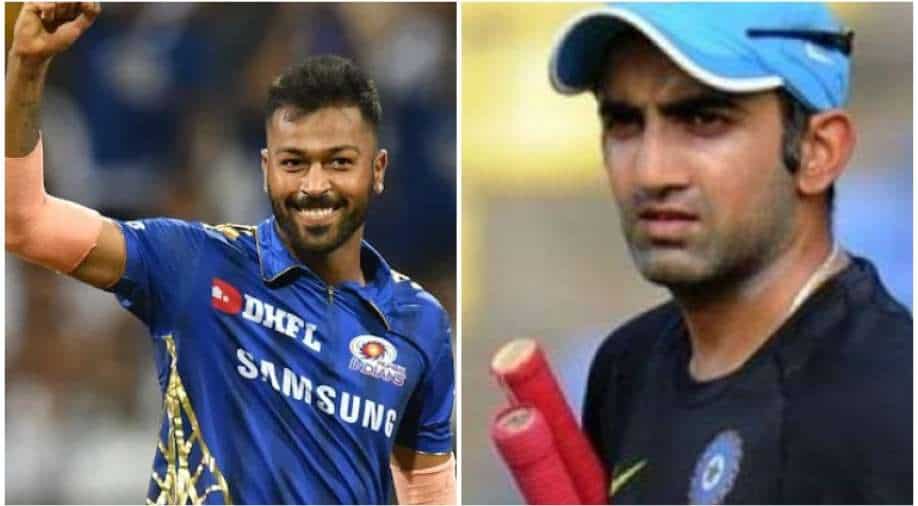 Gautam Gambhir reacts with Hardik Pandya not bowling in IPL 2021 ahead of T20 WC. Photograph:( AFP )

IPL 2021: Gautam Gambhir has slammed MI all-rounder Hardik Pandya for not bowling at all in the second and final leg despite the T20 World Cup set to commence soon after IPL's conclusion.

Mumbai Indians (MI) haven't been at their dominant best in IPL 2021. While they continue to remain alive in the race for the fourth playoffs spot, the Rohit Sharma-led MI camp have to pull up their socks if they wish to retain the trophy for the third time in a row.

One of the main reasons for MI not being in rollicking form is due to their star performers not being upto the mark, injury concerns and mainly their batsmen's inability to adapt to the slow and tricky surfaces in the UAE. In addition, Hardik Pandya's ordinary season, coupled with him not bowling at all in IPL 14, has added to MI's woes. Former Kolkata Knight Riders (KKR) captain and Indian opener Gautam Gambhir has now slammed MI all-rounder Hardik for not choosing to bowl even in the second and final UAE leg despite the T20 World Cup set to commence soon after IPL.

Speaking to ESPNCricinfo, Gambhir stated, "The biggest upset in this batting lineup is Hardik Pandya. He hasn't played any cricket, he is just a one-format player for me now. He only plays white-ball cricket and hasn't delivered this year and he's got into the T20 World Cup side when he hasn't bowled either. So that's a huge surprise."

"Selectors will probably have to answer this whether he's actually going to bowl four overs in the World Cup and if he decides to do that, does he have those overs under him? If he decides to bowl in the World Cup he has to start bowling from now on, Whether it's one or two overs per game so that he can... deliver during the World Cup where India will be looking to win. But if he doesn't bowl during the World Cup, then it's actually pretty difficult for me to put him into the playing XI. If he doesn't bowl I don't think he can be a part of India's best playing XI," the ex-KKR skipper added.

Hardik hasn't been preferred in the longest format for long, in a bid to manage his workload and since he isn't willing to bowl long spells at the moment. However, he was expected to bowl some overs for the MI franchise in the final leg of IPL 14 to be able to prepare his body and mind for contributing with the ball for the Virat Kohli-led Men in Blue in the upcoming T20 WC, in the UAE from October 17.

Gambhir feels Hardik might not even find a place in India's XI if he remains a specialist batsman and doesn't play as an all-rounder. The 27-year-old, who was last seen bowling in the Sri Lanka series in July, will be looking forward to chip in with few overs in MI's last league stage encounter, versus Sunrisers Hyderabad (SRH) on Friday (October 8).