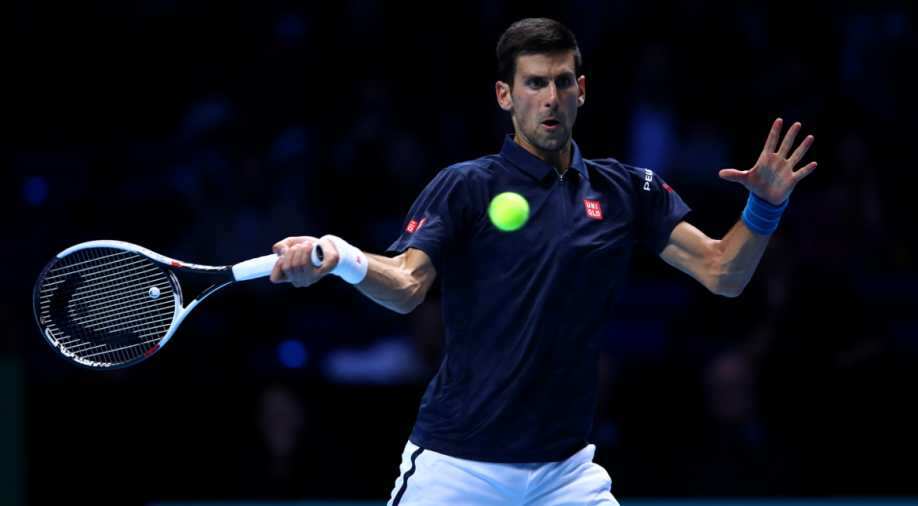 Novak Djokovic of Serbia hits a forehand during his men's singles match against Milos Raonic of Canada on day three of the ATP World Tour Finals at O2 Arena on November 15, 2016 in London, England. Photograph:( Getty )

Novak Djokovic rediscovered his warrior spirit to slide past Canada's Milos Raonic 7-6(6) 7-6(5) in an exciting battle at the ATP World Tour Finals on Tuesday. The 29-year-old Serb's recent malaise has cost him the world number one ranking he held for 122 weeks, but when backed into a corner by an inspired Raonic he responded in the belligerent manner that has earned him 12 grand slam titles.

World number four Raonic threw everything at Djokovic for just over two hours, striking 42 winners and 14 aces, but Djokovic, aiming for a fifth consecutive title at the year-ender, was equal to everything.

Having edged a high-intensity first-set when Raonic double-faulted on set point in a tense tiebreak, Djokovic looked to have broken the shackles in the second to lead 4-2. Raonic, who was serving at 140mph, stormed back to put Djokovic on his heels. He came only within one missed forehand of extending the match into a decider.

But Djokovic produced a magical backhand flick at 5-5 in the night's second tiebreak, then an ace, before Raonic succumbed to an eighth successive defeat at the hands of the Serb when his backhand flew wide.

Putting away the chances

Despite having won only one set in their previous seven matches, Raonic betrayed no inferiority and forced Djokovic to save three break points early on. Wimbledon runner-up Raonic was the aggressor throughout the opener, while Djokovic absorbed the blows and waited to strike.

Raonic did little wrong but was punished for not putting away a volley when up 3-2 in the tiebreak, and at 5-5 Djokovic produced an incredible backhand lob. The Canadian saved a set point with a barrage of bludgeoning forehands that cracked Djokovic's defences, but then botched a forehand return off a dismally weak second-serve before double faulting.

Djokovic was twice dinged back after breaking in the second set, and had Raonic converted the set point that came his way when Djokovic tugged a backhand long at 5-6, the outcome may have been different. It was not to be though, as Djokovic wriggled out of trouble to keep the pressure on Murray in the race to end the year on top for the fifth time in six seasons.