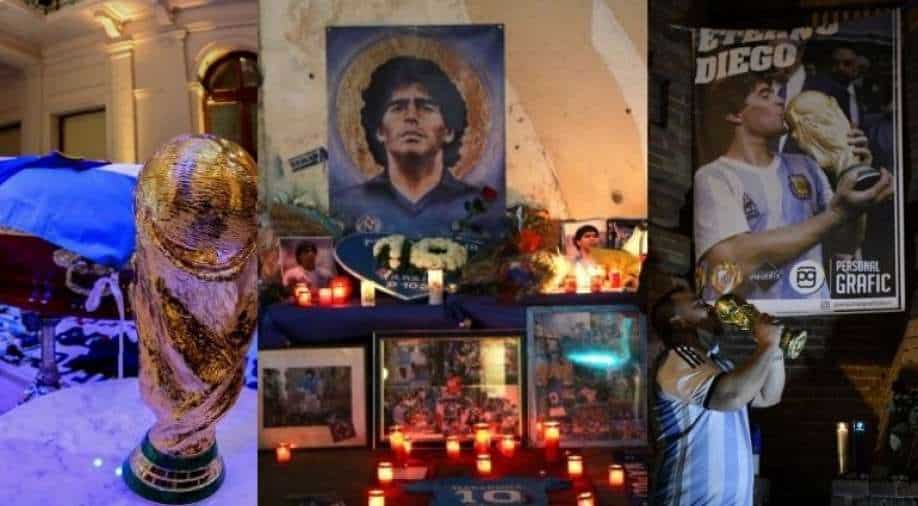 Men fall like leaves and greatness is intangible, undefined but some of us who have seen God at play can tell the world we lived in the time of the Great Maradona.

'The Greatest’, God, Sachin Tendulkar, Messi- these are names and terms spoken loosely in a defined age beret of true God’s.

The definition of a true God does not fall on us mere mortals because he/she is an idea, something we worship and hope to emulate, a thought which transcends reality.

Born in Argentina in Lanús near Buenos Aires this Maradona was one such God, a man-God. Born in acute poverty who once fell in a cesspool and then touched the heights of fame & glory only to fall again and then quickly disappear before our eyes.

The obvious flaws & scarred genius was a common trait of this God but then the disciples never complained because on the field it was always Dussehra, Diwali & Christmas put together.

My only ‘real’ memory of angel Maradona was when as a kid I visited a puja pandal and saw him placed next to Durga. It was quite clear he was in fact a Man-God; revered, loved, followed- and hated.

He was not someone who was satisfied with just showing up at Barcelona and filling his boots with awards and glory, the "little genius" took Naples - a little known port city in Italy -  and turned them into Italian champions and where he is worshipped till today as a deity for football feats achieved decades ago and he is sure to be celebrated centuries later by kids, men & women.

Men fall like leaves and greatness is intangible, undefined but some of us who have seen God at play can tell the world we lived in the time of the great Maradona and he now resides with the true Gods where he is already busy teaching them the joys of the beautiful game.

Long live Maradona, your legions here on Earth will miss you.