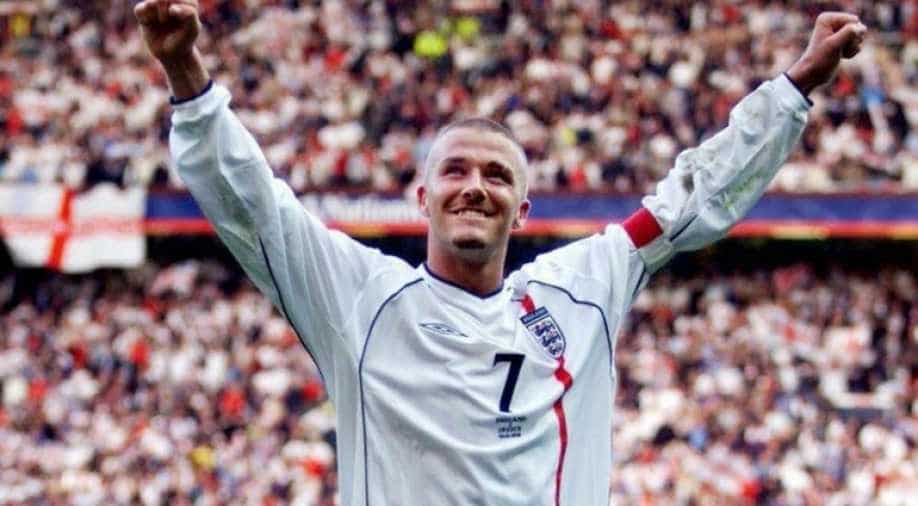 David Beckham scored the most famous free-kick that sent England to the 2002 World Cup. Photograph:(Twitter)
Follow Us

Former England's professional footballer, David Beckham has turned 43 today and wishes have poured in from family and friends.

Beckham is one of the most iconic sportspersons of the United Kingdom not only by his dribbling skills but also by his stunning looks.

He announced his retirement in May 2013 after a 20-year long career, during which he won 19 major trophies.

Recently, after a four-year wait, he launched a  Major League Soccer franchise in Miami after.

On his 43rd birthday, let's Rewind to the time in the 70s, 80s and 90s dominated by Juninho Pernambucano, Michel Platini, Gheorghe Hagi, Ronaldinho and Alessandro Del Piero who were exponents of the free-kick.

David Beckham in the late 90s and early 2000s is colossus of the free-kick, a player whose dynamic ‘curve’ stunned opponents and mathematicians alike.

Beckham's free-kick against Greece in the 93rd minute at Old Trafford took England to the World Cup 2002, it confirmed Beckham’s status as a master craftsman of the free-kick.

The Superman-like stunt was definitely a new theory postulated by Beckham. But, was he a mathematician? Guess not, but some physics students have derived a formula to simplify the most famous free kick.

The mathematical formula is:

The mathematical formula to 'bend it like Beckham'. (Others)

Four physics students found that the distance a ball bends as a result of the 'Magnus effect'.

If the velocity of a fluid increases then a drop in pressure results. This means, air pressure drops on the left-hand side of the ball and increases on the right. The pressure difference creates a force acting away from the area of high pressure than the ball moves to the left.

This phenomenon is responsible for the spinning of the ball and its curving arc as it travels through the air.

That phenomenon is depended on the above-mentioned formula. Where in the formula, R= Radius of the ball, ρ= Density of the air,  ω= Ball's angular velocity, v= Velocity through the air, m= mass and x= The distance travelled by the ball in the direction it was kicked.

Beckham, of course, had no clue about the ‘formula’ – that is for scientist’s job to decode, he was just practicing his trade.

So every time you watch the ball hitting the cross-bar or simply curving inside, remember there’s a science to it but don’t tell the players this because they are just displaying their natural gift, a god gifted talent meant to impress the crowd.