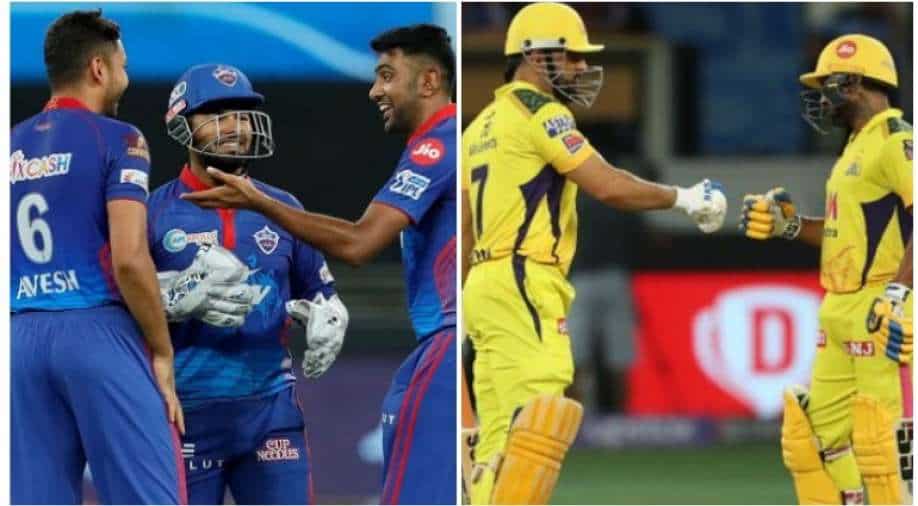 Avesh Khan reveals how Rishabh Pant helped him in getting MS Dhoni out twice. IPL/BCCI Photograph:( Others )

IPL 2021: Delhi Capitals' (DC) Avesh Khan has credited Rishabh Pant for helping him get rid of MS Dhoni twice in the ongoing season.

Delhi Capitals' (DC) pacer Avesh Khan has had a breakthrough season in IPL 2021, being the second-highest wicket-taker overall with 23 scalps in 15 games. Avesh has dismissed some of the greats of the game, such as MS Dhoni, Virat Kohli, etc.

For the unversed, Avesh got rid of Chennai Super Kings' (CSK) captain Dhoni twice during the league stage encounters when DC locked horns with the Yellow Army. The Delhi speedster's extra pace and bounce troubled Dhoni as he dismissed him twice and made heads turn. In an interview with ESPNCricinfo, Avesh has now revealed how DC captain Rishabh Pant plotted the dismissal of Dhoni on both the occasions.

“When Mahi bhai walked in, Rishabh told me to bring in the mid-on and mid-off. He said if he [Dhoni] hits you over them, that is fine, but don't pitch fuller, bowl your length. At first I disagreed with him and asked him not to bring in five fielders and leave only four inside [the 30-yard circle], but he insisted. So I did that and the second ball, he [Dhoni] attempted to hit over when he saw both fielders [mid-on and mid-off] inside the circle. He had not played for a while, and Rishabh took advantage of that and we got the wicket,” Avesh said.

Speaking on the second instance when he got rid of Dhoni, Avesh added, "Once again I had a chat with Rishabh. Basically, he said to pitch a hard length and let him [Dhoni] hit from there because it is tough to do that. And that is what I did and he edged."

However, Avesh couldn't dismiss Dhoni for cheap when CSK and DC locked horns for the third time in IPL 14; during the Qualifier 1 on Sunday (October 10). Coming out to bat in the penultimate over of the contest, with CSK needing 19 off 9 balls to chase down 172, Dhoni missed two deliveries off Avesh but smacked him for a six before finishing things off in style in the final over.

Pant-led DC will now face Kolkata Knight Riders (KKR) in Qualifier 2, at the Sharjah Cricket Stadium, Sharjah, on Wednesday evening (October 13) for a final in the place. Avesh, meanwhile, will hope to take DC to their second successive IPL final and get another chance to dismiss Dhoni.