Days after Virat Kohli getting tetchy with journalist, Ishan replaces Rohit as opener against NZ in T20 WC 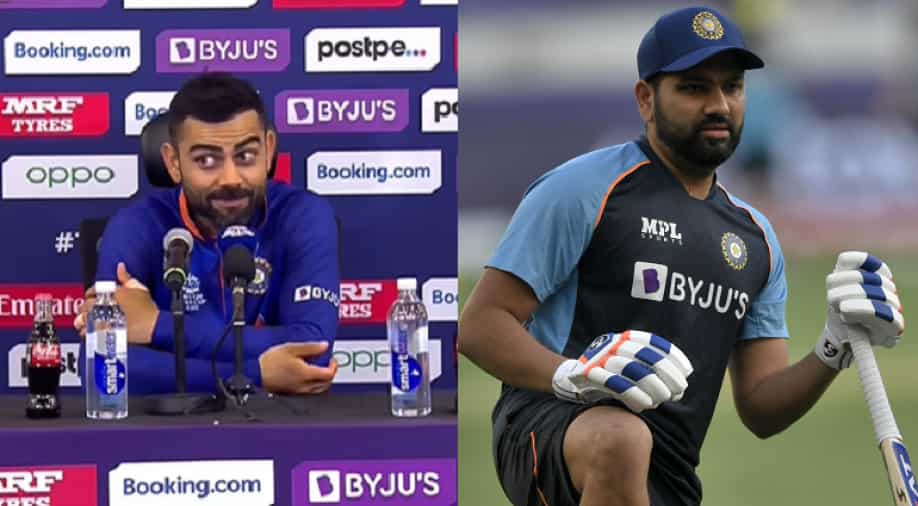 Indian skipper Virat Kohli was left bemused by a reporter's question on whether he should consider replacing Rohit Sharma with Ishan Kishan as an opener after the team's loss against Pakistan. Ishan replaced Rohit as an opener in India's clash against New Zealand in the T20 World Cup 2021 on Sunday.

Indian skipper Virat Kohli was left bemused in the post-match press conference after the team's ten-wicket loss against Pakistan in their opening game of the T20 World Cup 2021 when a reporter asked if he should consider dropping Rohit Sharma for Ishan Kishan in the playing XI. Kohli was left stumped by the question and told the reporter it was a very 'brave' question.

"Do you think its a mistake to not play Ishan Kishan and he could have done better than Rohit Sharma?" - the journalist asked Kohli after India's loss against Pakistan. Kohli burst into laughter on hearing the question and replied - "That's a very brave question, what do you think sir? I played the team that I thought was the best. What is your opinion."

"I am just asking. I am not going to comment," the reporter responded.

"Will you drop Rohit Sharma from T20 internationals? You will drop Rohit Sharma? Do you know what he did in the last game that we played? Yeah? Unbelievable. If you want controversy, please tell me before so I can answer accordingly," Kohli then said while laughing.

The video of the incident had gone viral on social media with many criticising the reporter for his question. But days after Kohli laughed off his question, the reporter's prediction came partially true on Sunday (October 31) as India locked horns with New Zealand in their second Super 12 game of the T20 World Cup 2021.

Also Read: 'It's ridiculous': Virat Kohli says 'too long a break' as India take on NZ after seven days in T20 WC 2021

While Rohit was not dropped from the playing XI, he was replaced by young Kishan as an opener. Many were expecting KL Rahul to be demoted after captain Kohli confirmed during the toss that Kishan will open the innings after replacing an injured Suryakumar Yadav in the XI.

However, that was not the case as Kishan opened the batting with KL Rahul against the Black Caps. The move didn't work in India's favour as the young left-hander was dismissed after scoring just 4 runs of 8 balls and failed to make an impact.

India got off to a disatrous start in the must-win game against New Zealand as they lost Kishan cheaply on 4 before Rahul was dismissed after scoring 18 off 16 balls. Rohit, who came out to bat at no.3, was dropped on the very first ball he faced but survived after Adam Milne spilled a seatet to hand him a lifeline.

The Hitman was sent packing by Ish Shodi after scoring on;y 14 runs of 14 balls before the spinner got rid of skipper Kohli on 9 off 17 balls as were reduced to 48/4 inside the first eleven overs.