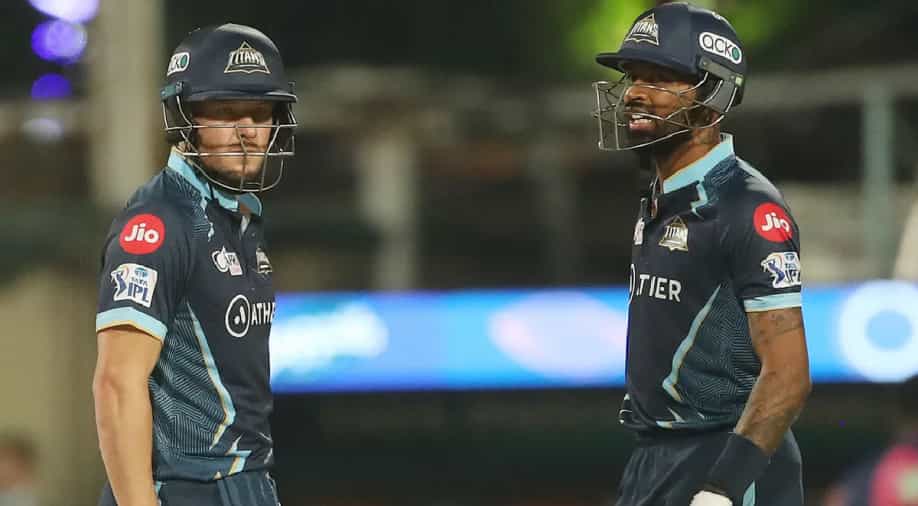 David Miller played a sensational knock of unbeaten 68 off just 38 balls to help Gujarat Titans (GT) qualify for the final of IPL 2022 with a 7-wicket win over Rajasthan Royals in the 1st Qualifier at the Eden Gardens on Tuesday (May 24).

David Miller smashed three back-to-back in the final over from Prasidh Krishna to help Gujarat Titans (GT) thrash Rajasthan Royals (RR) by 7 wickets at Eden Gardens in Kolkata on Tuesday (May 24) and secure a spot in the final of the Indian Premier League (IPL) 2022. Gujarat Titans have become the first finalists of the season in their debut campaign in the IPL and have been playing phenomenal cricket throughout the tournament. It was yet another finishing masterclass from Miller as he helped his side chase down the target of 189 runs comfortably.

Asked to chase down 190 runs at the Eden Gardens, Gujarat Titans were far from favourites when they started their run-chase. To make matters worse they lost opener Wriddhiman Saha on a duck in the very first over before Shubman Gill (35) combined with Matthew Wade (35) to add 72 runs for the second wicket.

It was a brilliant knock from Gill under pressure which was laced with 5 fours and a six before an unfortunate run-out ended his stay in the middle. Wade too was dismissed shortly after Gill's departure as he was caught by Jos Buttler off the bowling of Obed McCoy in the 10th over.

Just when it looked like, Rajasthan Royals were getting back into the game, GT skipper Hardik Pandya and in-form David Miller joined forces in the middle to take the game away from them. The duo looked in brilliant touch and didn't let the pressure get the better of them as they manoeuvred the strike well and played big shots at regular intervals.

While Miller scored a fabulous 68 off just 38 balls with the help of five sixes, Hardik scored a quickfire 47 off 27 balls laced with 5 fours. With 15 to get off the final over, it was Miller who took on Prasidh Krishna and went after the RR pacer from ball 1. The left-hander smacked him for a hat-trick of sixes to take GT over the line with ease.

It was a clinical performance from the GT batter after their bowlers were taken to the cleaners at the Eden Gardens during RR's innings. The Royals rode on Jos Buttler's terrific 89 off 56 balls and skipper Sanju Samson's quickfire 26-ball 47 to post a strong total of 188 runs in the 1st Qualifier but their efforts went in vain.

Rajasthan Royals will now get another shot at reaching the final when they lock horns with the winner of the Eliminator between Royal Challengers Bangalore and Lucknow Super Giants in the second Qualifier on Friday (May 27). The final will be played on Sunday (May 29).