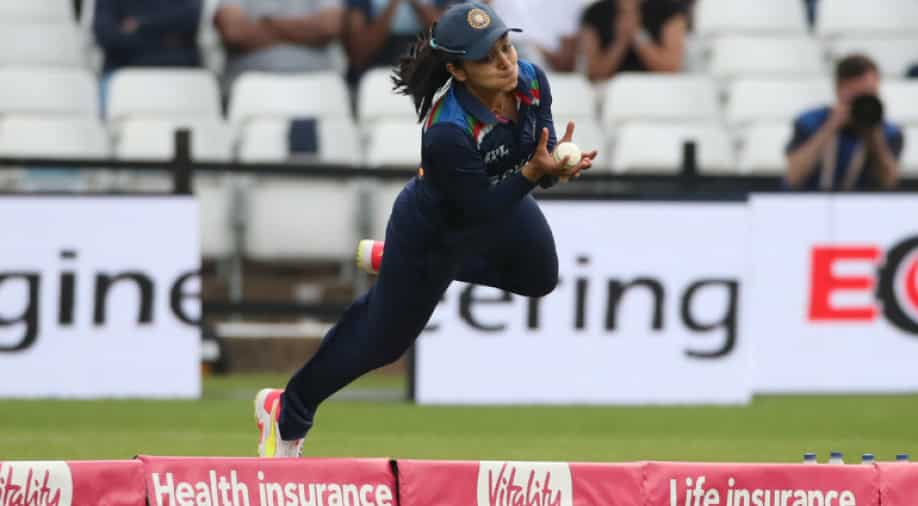 Harleen Deol hopped across the boundary rope, tossed the ball inside, and again jumped forward to finish probably the best gets at any point taken in women's cricket.

Indian cricketer Harleen Kaur Deol took an electrifying catch in the first T20I against England. This exertion of Harleen Deol has overwhelmed the social media and from any semblance of Sachin Tendulkar to Mithali Raj, everybody has commended Harleen Deol's splendid anticipation

Put to bat first, England were 166 for 4 in the 19th over when Amy Jones, batting on 43 off 26 balls, hit India's Shikha Pandey towards wide long-off. In the 19th over of England's batting, Amy Jones hit the ball towards long-off. Showing her games abilities, Harleen Deol hopped across the boundary rope, tossed the ball inside, and again jumped forward to finish probably the best gets at any point taken in women's cricket.

A fantastic piece of fielding 👏

That was a brilliant catch @imharleenDeol. Definitely the catch of the year for me!pic.twitter.com/pDUcVeOVN8

As good a catch one will ever see on a cricket field, from Harleen Deol. Absolutely top class. https://t.co/CKmB3uZ7OH

OMG 😱 🤯🤯@imharleenDeol take a bow!! Calling it now the best we will see this series!! pic.twitter.com/O4Dwm4OYlU

Witness to this screamer by @imharleenDeol last evening ✊ 👏 Great athleticism and presence of mind . Also , credit to the fielding coach @Im_AbhaySharma who ensures we toil hard on the ground with some smart fielding drills . https://t.co/rulvrYzenL

Regardless of such brilliance in the field, India couldn't get success in the rain-hit match over England. After England scored 177/7 out of 20 overs, India could just reach 54/3 in 8.4 overs before the game had stopped. No play could be conceivable after that as the DLS method needed to come into the spot to determine the destiny of the game.