Cricket: '18 months were filled with sleepless nights': Ravindra Jadeja on when he was dropped from Team India 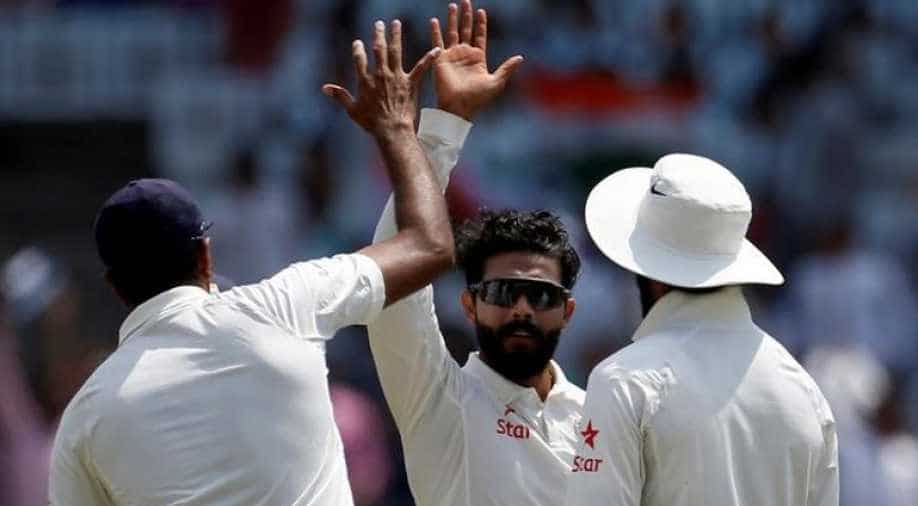 Jadeja, who grabbed five for 124 and four for 52 in Ranchi, has gained seven points after starting joint-first with Ashwin at 892 points. Photograph:( Reuters )

'Those one-and-a-half years were filled with sleepless nights. I would keep thinking about how I am going to come back': Ravindra Jadeja.

Ravindra Jadeja is without a doubt truly outstanding, if not the best, fielders in global cricket right now. He is set to go to England where his fortunes drastically changed for great in 2018. From being out of the group in Tests and ODIs, Ravindra Jadeja is currently one of the key all-design players of this group that needs to win the World Test Championship.

In a talk with The Indian Express, Jadeja illuminates how he turned into an attacking batsman, his sizzling fielding, his early stages in bowling.

Ravindra Jadeja on the Oval Test where he scored 86 runs in the first innings:

"That Test changed everything for me. My performance, my confidence, everything. When you score in English conditions against the best bowling attack, it greatly impacts your confidence. It makes you feel your technique is good enough to score anywhere in the world. Later, Hardik Pandya got injured and I made my ODI comeback. From then on, my game has been going well, touchwood."

Ravindra Jadeja's this picture has been based on the rear of countless game-evolving run-outs and stupendous catches, the kudos for which regularly goes to his well-honed expectation abilities. Ravindra Jadeja saw that expectation is the distinction between 'easy' catches for him and 'blinders' for different fielders. He added that his abilities are only a mix of experience and sharpness.

"I know my anticipation is very good in a match situation. I don’t know what others think about before the ball comes, but personally, after playing so many years, I know what the release shot of different batsmen is. And I can tell from how he is playing, where the ball is going to go. I have that extra fraction of a second and I move there quickly. So, at times, you will see me getting into positions and take ‘easy’ catches, but I know if it were someone else, it would have been a blinder as he hasn’t moved across quickly in anticipation" - he said.

ALSO READ: Cricket: 'Would like to play all seven Tests this summer': James Anderson

"It does feel good when I am appreciated for my fielding, they might not see my hard work, but they know it. When I drop catches also, people don’t criticize, it’s more like, ‘hota hai, it happens" - he added.

When requested to uncover the 'secret' of his ability, Ravindra Jadeja said it was a blend of his dad's qualities and a great deal of constancy. He asserted that had he not filled in as hard as he has, his shoulders would have surrendered at this point. Jadeja additionally credited his prosperity to youth mentor Mahendra Singh Chauhan.

"You must ask my papa. I have his genes. Some of it is natural. Lots of hard work with shoulder exercises, gym, practice. It’s not all-natural for me. I work a lot on it else, my shoulders won’t have lasted long. It’s been 12-13 years but I have maintained my shoulder. I bowl a lot too. I train well and know how to take care. My coach Mahendra Singh Chauhan in Jamnagar would make us run and field; only then you can bat. In the first four years, I would only field a lot. He would seem stern, doesn’t show expressions but he is very helpful. He was very good" - he said.

Ravindra Jadeja opens up on the new normal: "It’s very tough. When we underwent quarantine for the first time, we didn’t realise that it would get tougher. Now, before every series, we have to undergo quarantine. Sometimes, we feel very bored but at the same time, we are getting to play cricket. Now before entering the hotel we download movies. One can’t exercise the whole day, so one has to find some entertainment. Earlier it was 14 days of quarantine and now we have seven days.  Sometimes killing time is a challenge, though."

Ravindra Jadeja will be found in action for the World Test Championship finale in Southampton from June 18.