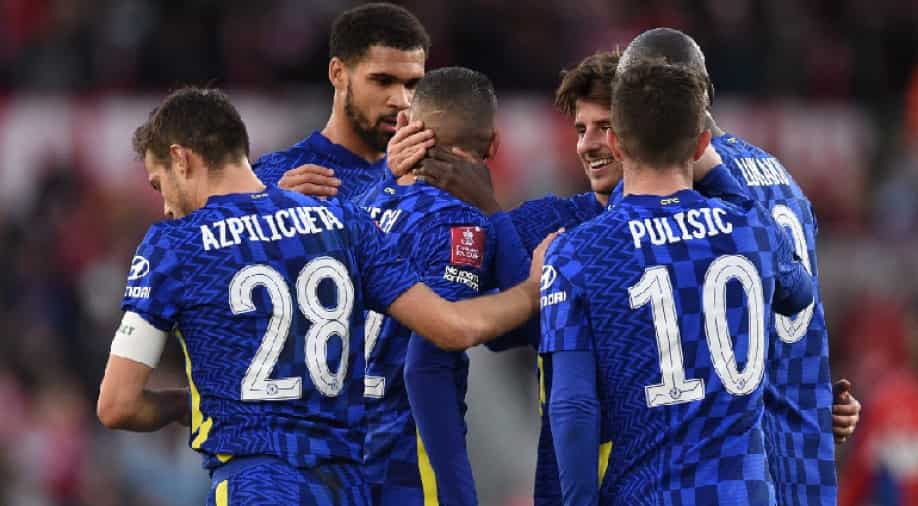 Chelsea FC are set to have new owners soon as new era beckons on the club. Photograph:( AFP )

A number of bidders have expressed interest in buying Chelsea football club after the club was put up for sale by owner Roman Abramovich.

Raine Group, the U.S. bank overseeing the sale of Premier League club Chelsea, plans to narrow down the shortlist of bidders to three on Monday or Tuesday, sources told Reuters, with one consortium lead by Nick Candy increasing their offer.

Chelsea were initially put up for sale by owner Roman Abramovich following Russia`s invasion of Ukraine and before sanctions were imposed on the oligarch by the British government, effectively giving it control of the club.

Raine set a deadline of 2100 GMT last Friday for bids to be put forward, with several being made public, while sources close to the deal said many more had been submitted privately.

To move things forward, Reuters has been told that Raine, in consultation with the club, will narrow down the shortlist, with the process slowed by revised bids still coming in.

One of the three bidders who made their offers public on Friday, Candy`s Blue Football consortium, revised their bid on Monday, they told Reuters in a statement, after being joined by "another large Korean financial institution."

British property developer Candy submitted a bid of over two billion pounds ($2.63 billion) to Raine on Friday, but has since increased his offer "significantly", without disclosing by how much or the name of the new investor.

He had already been joined in his consortium by South Korean companies Hana Financial Group and C&P Sports Limited before the new investors got on board.

"The bid is sourced from credible co-venturers whose attitude towards governance is top rated."

Over the next few weeks, a preferred buyer or buyers will be submitted to the government who must issue a special licence for any sale and who require evidence that Abramovich will not make any financial gain.
From there it will be up to the prospective buyer to pass the Premier League`s Owners` and Directors` Test before completing a takeover.

The test outlines factors that would prohibit an individual from becoming an owner or director of a club.
These include criminal convictions for a wide range of offences, a ban by a sporting or professional body and breaches of certain key football regulations, such as match-fixing.

Along with Candy`s bid, the two other consortiums who made their offers public last week were the Chicago Cubs owners the Ricketts family, and the pairing of former Liverpool chairman Martin Broughton and World Athletics President Sebastian Coe.

Some bids are only being made public now, with London-based global investment firm Centricus confirming on Monday that they had offered to buy Chelsea, a move driven by co-founder Nizar Al-Bassam and CEO Garth Ritchie, who are said to be season-ticket holders.

Candy`s bid, while not assured of being on the shortlist, said on Monday that they had held initial discussions with tech platform PrimaryBid, with a view to potentially considering a community enfranchisement model for Chelsea, should the bid be successful, focused on improving fan involvement and engagement.