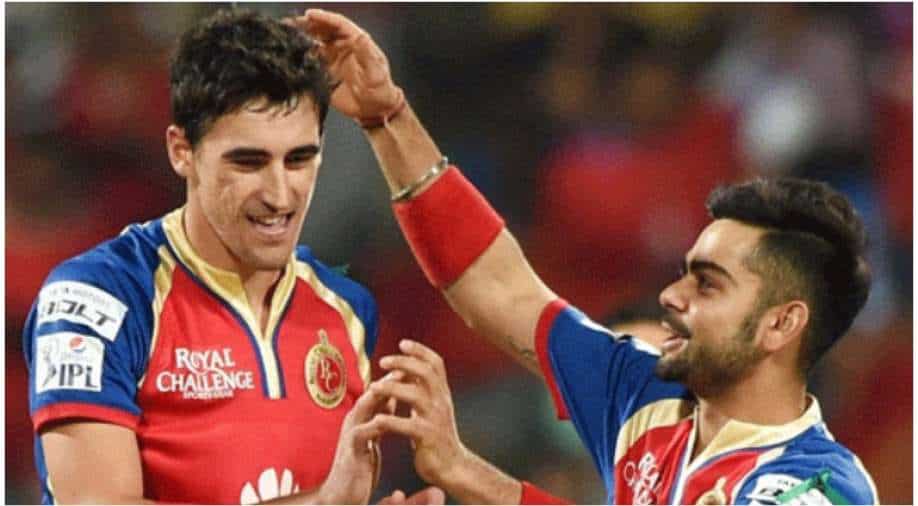 Mitchell Starc hasn't played in the IPL since 2015 Photograph:( PTI )

It’s been seven years since the 31-year-old Starc played in the Indian Premier League, citing workload management and injuries concerns. Earlier, he had played 27 matches for the Virat Kohli-starrer Royal Challenger Bangalore (RCB) from 2012 to 2015 in the cash-rich league.

Australian star pacer Mitchel Starc is considering putting his name in the IPL 2022 mega auction, which will be held in Bengaluru on February 12 and 13.

It’s been seven years since the 31-year-old Starc played in the Indian Premier League, citing workload management and injuries concerns. Earlier, he had played 27 matches for the Virat Kohli-starrer Royal Challenger Bangalore (RCB) from 2012 to 2015 in the cash-rich league.

"I've got two days to get my paperwork in, so that might be something to do today before training. I've not put my name down just yet, but I've got a couple more days to decide on that. It's certainly on the table regardless of what the schedule has got coming up," Cricket.com.au cited Starc's remarks ahead of the fifth and final Ashes Test in Hobart.

"I haven't been for six years or so. Obviously, with a heavy weighting towards T20s over the last period of time and the World Cup coming up later this year, that's one to take into consideration as well. There's a bit going on with scheduling and what-not to get our heads around, certainly for us multi-format players," he further added.

Australia has a tight schedule in the first half of the year 2022; including three ODIs and a T20 to be played with New Zealand before five T20Is against Sri Lanka at home. Thereafter, they travel to Pakistan for a multi-format tour, then to New Zealand for yet another white-ball tour before the players head to the IPL. Despite the busy schedule, Starc said he was very much thinking of the IPL.

“The schedules are quite jam-packed, when you throw in all the tours, obviously we've got a couple of white-ball series post the Ashes before that Pakistan tour. Then you take in consideration the IPL, then a Sri Lankan tour after that, so it's a massive six months of cricket for everyone, but certainly for those multi-format players," he said.

The Australian fast bowler intends to be the only fast bowler to play all five Ashes Tests. While there was concern about Starc's workload after he took just one wicket in the fourth Test in Sydney, the left-arm pacer laughed off any notion that he would need to be rested.

"I'm not looking for a break," he added. "It's the last Test match of the Ashes series and it's the pink ball too. I'd very much like to play. I guess it's in the hands of the selectors but I won't be asking for a rest."