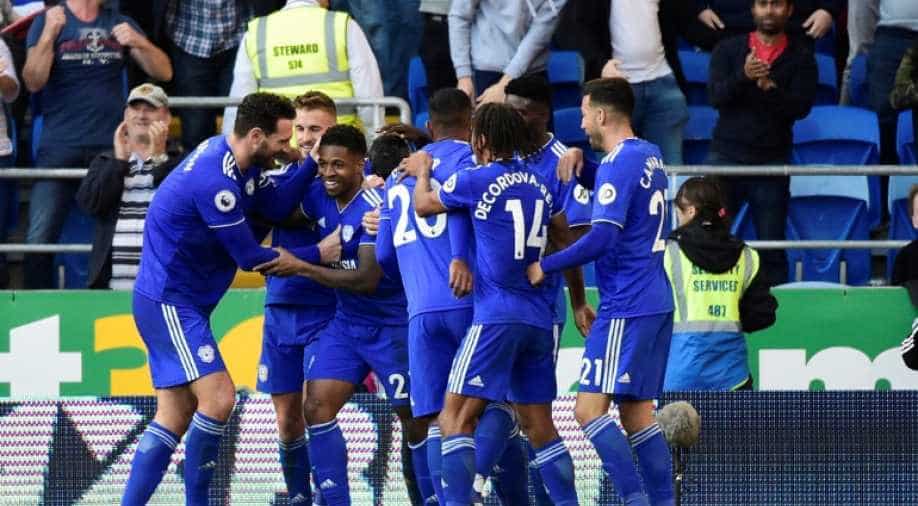 The result enabled Cardiff to climb out of the relegation zone into 17th position on five points from nine games, leaping over Fulham on goal difference as the Cottagers dropped to 18th after their worst start to a top-flight season.

Promoted Cardiff City celebrated their first Premier League win of the season after coming from behind to beat fellow top-flight newcomers Fulham 4-2 at home in a rip-roaring clash on Saturday.

The result enabled Cardiff to climb out of the relegation zone into 17th position on five points from nine games, leaping over Fulham on goal difference as the Cottagers dropped to 18th after their worst start to a top-flight season.

Second-half goals from Callum Paterson and Kadeem Harris clinched it for Cardiff after Josh Murphy and Bobby Reid had overturned Andre Schurrle's opener for Fulham and Ryan Sessegnon had levelled for the visitors in a frantic opening period.

Sessegnon was quick to identify poor defending as the cause of Fulham's latest setback, as they stayed the only Premier League side yet to keep a clean sheet this season.

"At times we played well but goals are leaking too much and we need to change that," the 18-year-old winger told the BBC.

"I can't really put my finger on what the problem is, but we need to stick together, believe in ourselves and keep fighting, there's a long way to go."

Cardiff manager Neil Warnock was delighted and praised his team as well as the home crowd.

"It's just a great feeling for everyone at the club," he said. "We persevered and they didn't let the disappointments get them down.

"We are made of stern stuff, the fans are unbelievable as well. In the second half we rolled our sleeves up and said 'this is our season'. I can enjoy my weekend now."

Former Germany striker Schurrle fired Fulham ahead with a superb individual goal before clinical finishing by Murphy and Reid turned the match on its head inside the opening 20 minutes.

Sessegnon equalised with a composed finish before missing a pair of chances either side of halftime which ultimately proved costly for Slavisa Jokanovic's side who have conceded 25 goals, more than any of their Premier League rivals.

Paterson pounced on a half-cleared cross to put Cardiff back in front before late substitute Harris sealed the contest in the 87th minute, sliding in at the far post to tuck the ball past goalkeeper Marcus Bettinelli.

Jokanovic was disappointed but urged his players to keep their heads up.

"We are frustrated after this kind of defeat," he said.

"We have so many defensive problems but we have to find a solution. We must be brave and keep going to fix our mistakes."

KXIP vs MI, IPL 2020 Live Streaming: When and where to watch Kings XI Punjab and Mumbai Indians?