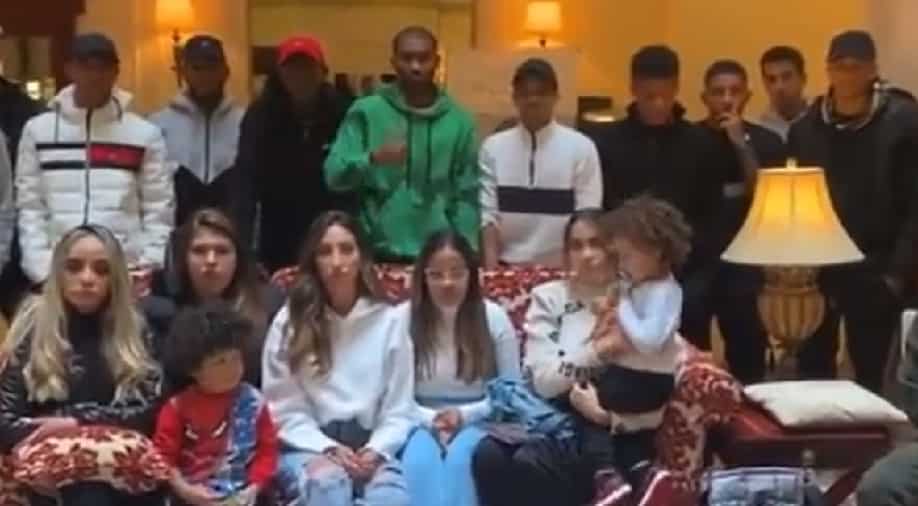 Brazilian footballers stuck in Ukraine with their families have appealed for help. Photograph:( Twitter )

Brazilian footballers, who play for Ukrainian clubs like Shakhtar Donetsk and Dynamo Kyiv have appealed to be rescued from the country amid the ongoing war with Russia.

A group of Brazilian footballers based in Ukraine appealed to their government to be rescued following Russia`s attack on their host country on Thursday.

"All our friends and family, the situation is serious and we are prisoners in Kyiv awaiting a solution to get out," Junior Moraes, a Shakhtar Donetsk player who is a naturalised Ukrainian, said on Instagram.

In a video recorded at a hotel where around a dozen players had gathered with wives and children, members of the group asked Brazilian authorities to come and rescue them.

"We really feel abandoned because we don`t know what to do," one of the women said. "We don`t know how to resolve this situation."

The Brazilian foreign ministry later said the embassy in Kyiv was "open and dedicated ... to protecting the close to 500 Brazilian citizens in the Ukraine."

Without referring to any individuals or groups it urged Brazilians to remain in daily contact with the embassy and said those in the east of the country should move to the capital Kyiv if it is safe to do so.

Group members said they had gathered at the hotel to meet and discuss how to get out of their predicament.

"There is a shortage of fuel in the city, the borders are closed, the air space is closed, we can`t get out," one of the men said.

Most of the players play with the Shakhtar Donetsk club, based in the east of the country.

Shakhtar has more than a dozen Brazilian players in their squad, while Dynamo Kyiv also has at last one Brazilian on their books. There was no immediate reply from Shakhtar to Reuters emailed request for comment. Dynamo Kyiv could not immediately be contacted for comment.

Russian forces invaded Ukraine on Thursday in a mass assault by land, sea and air, the biggest attack by one state against another in Europe since World War Two.