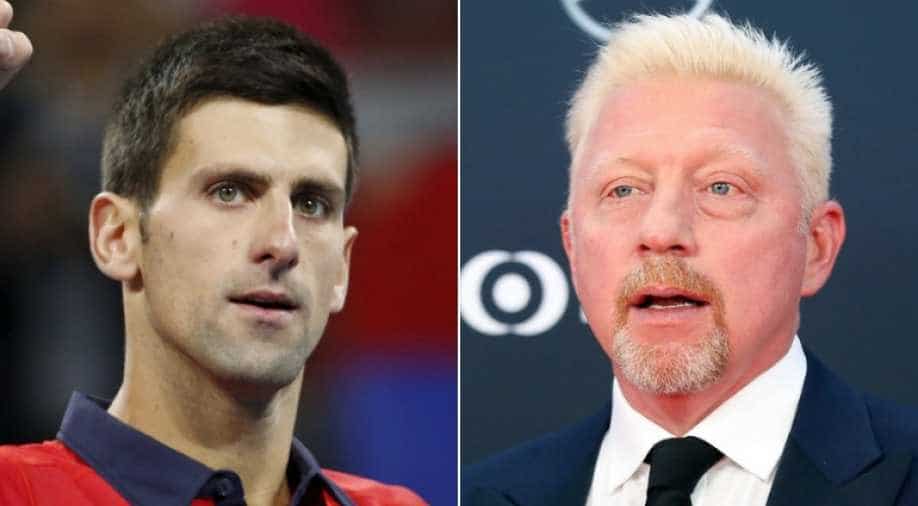 Becker, speaking ahead of the Laureus World Sports Awards on Monday night, said equalling Federer's tally of 20 Grand Slams is now in the realm of possibility.

While speaking during Laureus World Sports Awards, Becker told PTI that the Serbian's best chance to achieve the feat is in the next two years.

The 31-year-old Djokovic is back to his best after a lean run and has won the last three Grand Slams, including a record seventh crown at the Australian Open last month.

Federer is 37 but is still going strong despite his fourth-round loss at Melbourne Park.

Seventeen-time Major winner Rafael Nadal too is well and truly back in the mix and reached the final at Melbourne Park after an injury lay-off.

Becker, speaking ahead of the Laureus World Sports Awards on Monday night, said equalling Federer's tally of 20 Grand Slams is now in the realm of possibility.

"One of the misfortunes of playing in an era with Federer and Nadal is you can't really compare yourself to them. Normally, after 15 Grand Slams and seven Australian Open titles, you would say 'wow'.

"It is wow but the next question is 'will Novak ever break Federer's record?" said Becker, who coached the world number one to six Grand Slam victories between 2014-2016.

"The short answer is that there is a possibility (of Novak getting close to Federer's 20 titles) but a lot of things have to happen. Yes, he won the last three majors but before that, he had a two-year dry spot."

Following his split with Djokovic, Becker had questioned the Serbian's work ethic.

"Tennis is fickle and sensitive. A lot of things have to be right in your personal and private life. For Novak, it is perfect at the moment. Therefore he is on his way (to match Federer's feats) and hopefully nothing happens in the meantime," said the German, who himself won six Majors.

"Yes and no. Because he has a champion's mindset and that is something you never lose. He has his work ethic back, as well as his discipline, his desire and his love for the game, so, it was a question of time when he is going to win again," Becker said.

"When he is on, he is very very good. And he is still young enough, younger than Nadal (who is 32). There is an open window for him in the next two years to add to his trophy collection.

"When Federer won his 20th, nobody thought anyone could even come close. Now you have two guys (Djokovic and Nadal). Every Grand Slam is witnessing history."

Becker feels both Nadal and Djokovic might have to win more than 20 titles to break Federer's record, considering the Swiss master is playing at the moment.

"With Roger Federer, nothing is impossible. As long as he is healthy and wants to play, I would never bet against him. Yes, theoretically, there is an age issue but he is redefining that at 37. May be not on clay but on grass the way he plays, he is one of my favourites to win the Wimbledon. It will stay that way until he doesn't want to play anymore," he said.

Nadal, Federer and Djokovic are superstars not just in the tennis world, they are also considered global sporting icons. Their intense rivalry will go down as one of the most competitive in history books and the sport will be a lot poorer when they retire.

However, Becker sees the men's tennis landscape changing in the next five years.

"The younger generation will struggle to quickly move into their roles. But hey when I started playing it was Bjorn Borg and John McEnroe, I thought it was the greatest rivalry the world has ever seen. Next thing I know, I am involved with Edberg, Wilander and Lendl and then came Sampras and Agassi," he said.

"So every five to seven years you find these two or three players who are extraordinary. We can't imagine right now but in the next five years, we will have a new top three who may not have the name (and fame) which Federer, Nadal and Djokovic enjoy."