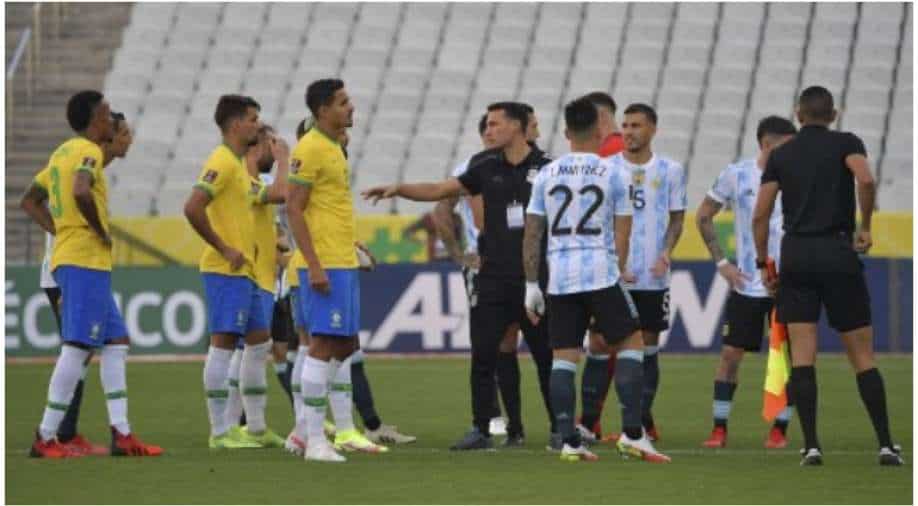 The Brazil vs Argentina World Cup qualifier match ended in only 5 minutes as police stormed onto the field for the arrest of 4 Premier League players.

After the Copa America final on July 11, Brazil and Argentina met once again during the World Cup qualifier match on Sunday (September 5).

However, the game ended with only five minutes of play being possible, as police and health officials stormed onto the field and called for the arrest of four Argentine players, who had travelled with the squad despite participation in the Premier League and broke the quarantine rules after entering Brazil.

As per a report in Goal.com, the likes of Emiliano Martinez, Cristian Romero and Giovani Lo Celso were given the green signal to appear in the qualifier match despite being accused of falsifying travel information upon their entry to Brazil, with mandatory quarantine and deportation advised by the Brazilian government for the trio and reserve Emiliano Buendia. Thus, the match saw barely five minutes being passed away when several officers stormed the pitch, much to the surprise of players from both sides.

"It was necessary to keep our sanitary protocol," said Antonio Barra Torres, the head of the Brazilian Health Regulatory Agency. "We called the federal police, that went to the hotel and we found out that they had already left for the Stadium. The rest is what you're watching live."

As the Argentine players refused, there were scenes in the middle before match got suspended abruptly.

Fate of the match?

"The World Cup Qualifiers is a FIFA competition," wrote the South American football governing body in a statement. "All decisions concerning its organisation and development are the exclusive power of that institution. The referee and the match commissioner will submit a report to the FIFA Disciplinary Committee, which will determine the steps to be followed. These procedures strictly adhere to current regulations."

The PL trio in the Argentine squad came from the United Kingdom. For the unversed, the country is in Brazil's own red-zone. Hence, a scuffle occurred in the middle as Messi & Co. believed that the authorities could've informed them before the match started whereas the police and other health officials reacted as the Argentine PL-returned trio didn't reveal to the immigration and health officials that they had returned from the UK.

After five hours of waiting and four of their players being under the threat of arrest, the Argentine players finally managed to board a flight back home.