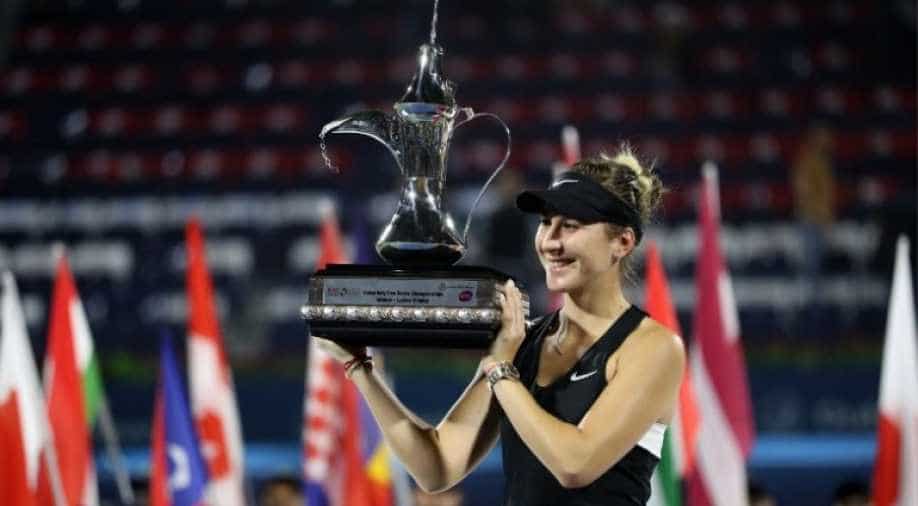 Belinda Bencic of Switzerland poses with the trophy after winning the final of the WTA Dubai Duty Free Tennis Championship. Photograph:( AFP )

Bencic last won a title in Toronto 2015 before the former world number seven's career was hit by a series of back and wrist injuries.

Belinda Bencic defeated Petra Kvitova 6-3, 1-6, 6-2 on Saturday to win the Dubai Championships and vowed to celebrate with her first parachute jump.

"We agreed that the next title I won, we would go skydiving," the Swiss said after ending a four-year trophy drought, explaining that the dare-devil plan may not please her father and coach, Ivan.

"It may be funny, because my dad is afraid of heights."

The 21-year-old Bencic last won a title in Toronto 2015 before the former world number seven's career was hit by a series of back and wrist injuries.

Saturday's title -- the third of her career -- will see her jump to 23 in the new world rankings from her current spot of 45th.

Bencic handed second seed Kvitova a setback in the Czech's quest to eventually claim the world number one ranking -- had the two-time Australian Open champion won the Dubai title, she would have risen to second in the world behind Naomi Osaka.

Victory over Kvitova was Bencic's fourth straight comeback this week at the Aviation Club.

"This is amazing, I can't believe it," the champion said. "It's an honour to be on the court with Petra, a great champion."

Bencic swept the opening set but was pegged back in the second as her two-time Wimbledon champion opponent returned the favour.

The third -- like the last three Bencic matches in Dubai -- made the difference.

Bencic broke in the third and seventh games. One game later, she netted a backhand on a first match point but profitted on a second as Kvitova returned long over the baseline.

"There was not much I could do, Petra plays so fast, so I had to do the same," Bencic said.

"I just kept trying to return balls and put the pressure on her.

"Physically I feel great, though I need to take some rest," said the winner whose last four matches all went to three sets.

Against Aryna Sabalenka in the third round she had to save six match points before going on to beat world number two Simona Halep and two-time defending Dubai champion Elina Svitolina.

Bencic won her 13th match of the season against two defeats while Kvitova was thwarted in a second final after winning Sydney but losing the Australian Open title match to Osaka.

"She played great, it was a tough one today for sure," Kvitova said. "It was a very exhausting week."