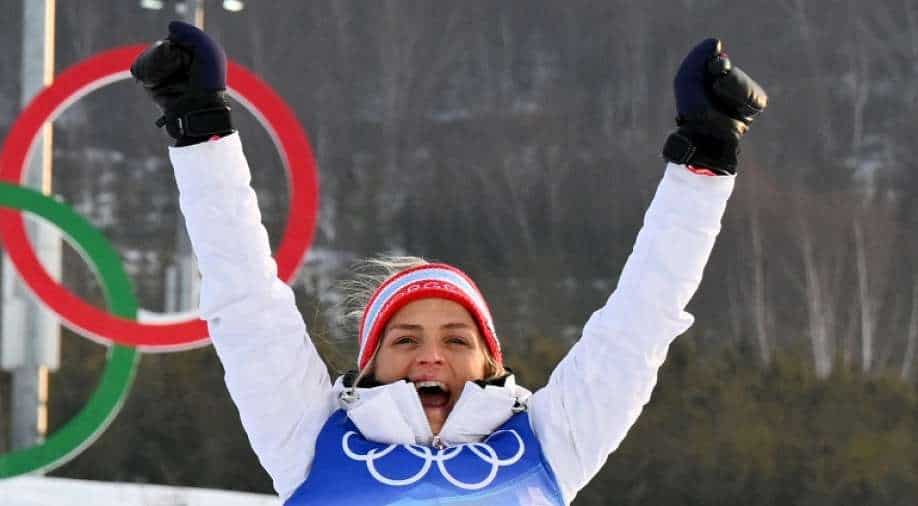 Therese Johaug put on a staggering late burst to snatch the gold medal in the 10 km classic race.

Norway's Therese Johaug put on a staggering late burst to snatch the gold medal in the 10 km classic race at the Beijing Games on Thursday to win by four-tenths of a second from Finland's Kerttu Niskanen.

Krista Parmakoski took the bronze medal, 31.1 seconds behind her Finnish teammate, but she never threatened the top two as Johaug secured her second individual gold medal of the Games in thrilling fashion.

"I felt I had the necessary power in the final stretch. I felt good. This was fun," she said.

"I was portioning out my efforts. If you give too much towards the top of the hill, it can hurt you in the last few kilometres. I wanted to keep my power for the final stretch. I felt good at the end."

The raw, biting cold of Saturday`s skiathlon was replaced by blazing sunshine and temperatures just below freezing, but a strong headwind at the start line reminded racers that the task ahead of them would not be an easy one.

Johaug built up a lead of 11.8 seconds over the first 1.8 km, but she was quickly reeled in by Parmakoski and Niskanen with Tatiana Sorina representing the Russian Olympic Committee also in the mix.

Johaug dropped behind but quickly got herself back neck and neck with Niskanen as the pair crossed the 3.6 km marker in exactly the same time of 10:47.7.

Known for her concise classical technique, Niskanen made her break at the midway point of the race and looked to have built up a comfortable lead of 11 seconds at the 6.3 km mark, but if she thought Johaug was out of contention, she was sorely mistaken.

The Norwegian blasted past sprint bronze medallist Jessie Diggins despite starting a minute behind her as she thundered up a late climb, and knowing victory was within her reach Johaug left nothing to chance.

She barrelled around the rest of the course, poling powerfully up the final straight in an incredible display of stamina to throw down the gauntlet to Niskanen.

Though the Finn dug deep, she could not match the intensity of the 33-year-old Norwegian and Niskanen collapsed after crossing the line a mere 0.4 seconds behind the winner.