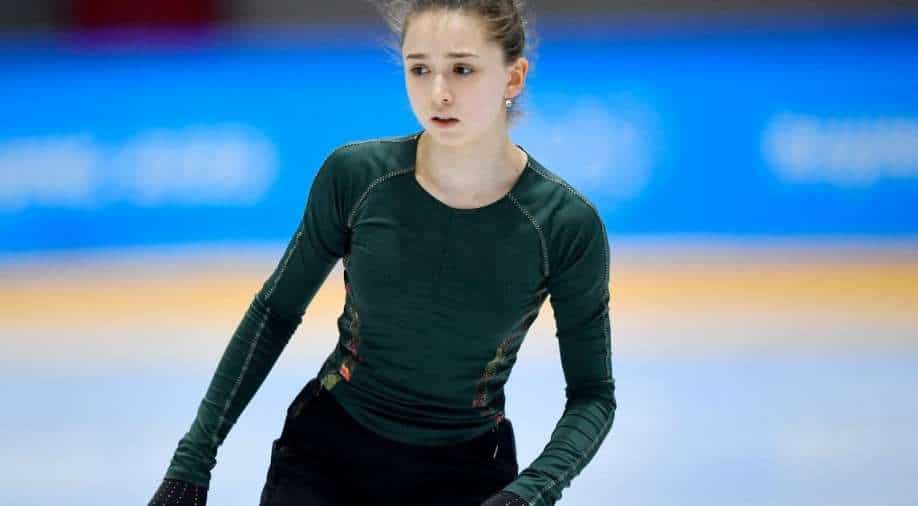 Valieva declined to answer questions in the mixed zone, the area where journalists interview athletes after competition

Russian figure skating sensation Kamila Valieva showed up for her scheduled practice at the Beijing Olympics on Thursday after Russian media reported the 15-year-old had tested positive for a banned substance.

The teenager was part of the Russian Olympic Committee (ROC) ensemble that won the figure skating team event on Monday, ahead of the United States and Japan. The ceremony to present her and her team mates with their Olympic medals has been delayed since then for unexplained legal reasons.

Wearing a navy blue hoodie, black tights with shorts over them and her hair tied in a bun, Valieva took to the ice just after 11 a.m. Her coach Eteri Tutberidze also attended.

Despite the pressure surrounding her, the teenager performed quadruple jumps in practice, after becoming the first woman to complete a quad jump at an Olympics during her teams winning performance on Monday.

Valieva declined to answer questions in the mixed zone, the area where journalists interview athletes after competition.

Russian media reported on Wednesday that Valieva had returned a positive test, with newspapers RBC and Kommersant naming the drug as Trimetazidine, which is typically used to treat chest pain.

Repeated attempts to reach the ROC chef de mission by Reuters were unsuccessful. His phone was not answering, and the ROC office in Beijing was locked and unmanned on Thursday. The ROC on Wednesday declined to comment on the reports that Valieva had returned a positive test.

In a press conference on Thursday, the International Olympics Committee repeatedly refused to answer questions, citing concerns about legal process.

With the USA and Japan waiting in the wings for their medals and questions swirling over whether Valieva will compete in her next event on Tuesday, the case is further complicated by the fact she is only 15.

According to WADA's world anti-doping code, athletes who commit doping violations should be publicly named, but this is not required if the person concerned is a minor under the age of 18.

In that case, according to rule 14.3.7, any optional public disclosure "shall be proportionate to the facts and circumstances of the case".

David Howman, the former director-general of WADA, told Reuters that parental consent is required before minors are tested.

"It's the worst nightmare of any organisation for athletes to be competing and then return a positive test during the Games," Howman said.

"It's very unusual for a positive test to be returned between competition and the medal ceremony. Usually an athlete in that position would immediately be disqualified, but that hasn't happened here."

He said the only time he could remember a ceremony not taking place was when South African Caster Semenya won the 800m at the World Athletics Championships in Berlin.

IOC spokesman Mark Adams asked for patience and understanding from other figure skaters as the legal case unfolded. He said Olympics officials would work as quickly as possible to sort out the medal ceremony.

Russian athletes are competing at the Beijing Games without their flag and national anthem, because of sanctions against Russia for previous violations.

Russia has acknowledged some shortcomings in its implementation of anti-doping rules but denies running a state-sponsored doping programme.

Valieva delivered one of the highlights of the Beijing Games so far when she landed the first quadruple jumps by a woman in Olympic competition.

Figure skating is a prestige sport for Russia, in which it has an outstanding record at Olympic and world championships. Any move to penalise Valieva or strip the team of their medals would likely cause a national outcry.

"The drug trimetazidine does not help an athlete in any way. At all. It was found in one single sample in December. A minuscule amount. Nothing in her samples before or since," he wrote on social media.

"There is no doping in the conventional sense. No! This cardiac drug has no impact on ... performance. Now leave Kamila in peace."

Former Russian pairs skater Tatiana Volosozhar, who won two gold medals at the 2014 Sochi Olympics, showed solidarity with Valieva on social media, calling for the use of the Russian hashtag #Iwillneverbelieve to send the teenager support.

Trimetazidine, or TMZ, works by increasing blood flow to the heart and limiting rapid swings in blood pressure. The drug is not approved for use in the United States. It has been on WADA's list of prohibited substances since 2014.

"It is very disappointing and a real shame that Russians continue to test positive at major events after all that country has gone through."