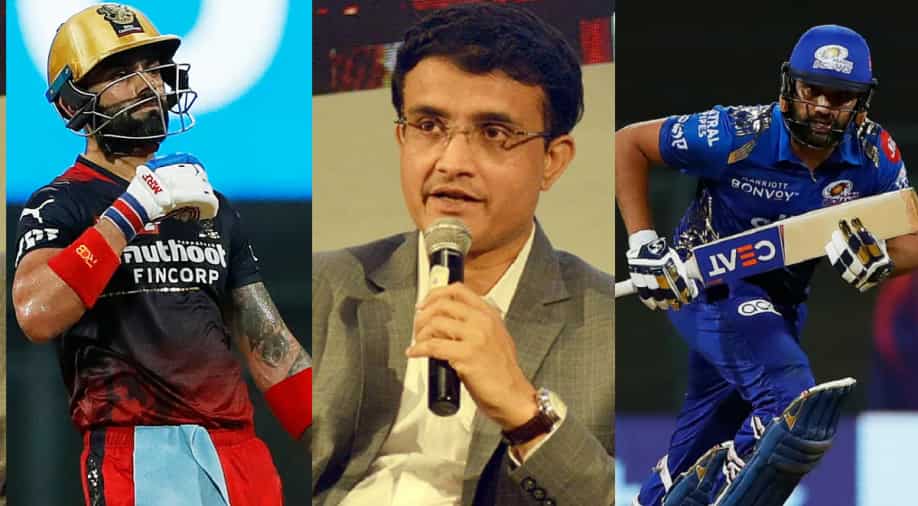 Sourav Ganguly has reacted to Kohli and Rohit's poor patch in IPL 2022. | Photo - IANS/IPL | Photograph:( Others )

BCCI president Sourav Ganguly has reacted to Virat Kohli and Rohit Sharma's struggles with the bat in IPL 2022 and has backed the duo to bounce back soon.

Virat Kohli and Rohit Sharma's struggles with the bat were quite evident in the recently-concluded league stage of the ongoing Indian Premier League (IPL) 2022. While Rohit endured his worst ever season with the bat in IPL history as his team Mumbai Indians (MI) were knocked out of the tournament early, Kohli too hasn't managed to score runs consistently for Royal Challengers Bangalore (RCB). Their poor form with the willow is also a huge concern for the Indian team going forward.

However, Board of Control for Cricket in India (BCC) president Sourav Ganguly is not losing his sweat over Kohli and Rohit's rough patch and has backed the duo to bounce back strongly. Kohli and Rohit have been two of India's best batters across formats and have been among the runs consistently over the years in international cricket.

While they were expected to deliver for the respective sides in the ongoing IPL 2022, both the superstars failed to make an impact. Rohit failed to score even a single half-century throughout the season as he finished with just 268 runs from 14 matches at a poor average of 19.14 and a strike rate of over 120.

Kohli, on the other hand, has been dismissed on golden ducks as many as 3 times in 14 matches so far for RCB this season. The batting maestro has amassed only 309 runs at an average of 23.77 and a strike rate of just over 117. Kohli still has a few games in his hands to end the season on a high as RCB have made it to the playoffs.

"They are very good players. I'm sure they will be back among runs. They play so much of cricket that at times they go out of form. Kohli played very well in the last game, especially when it was required for RCB. That's why he (Kohli) was so happy that RCB qualified," Ganguly said at a promotional event speaking about Kohli and Rohit's rough patch.

"They are all great players, it's a matter of time they will be at their best," the BCCI president added.

Also Read: Yuzvendra Chahal set to script historic feat, on the brink of breaking an all-time record in IPL

Rohit's failure to provide them with good starts at the top resulted in Mumbai Indians' bowling out of the competition early this season. The five-time champions got off to a woeful start in their campaign as they lost as many as eight matches in a row before winning four out of their remaining six games.

Kohli's struggles were undermined at RCB due to the good form of skipper Faf du Plessis, Glenn Maxwell and Dinesh Karthik, who has been phenomenal in the role of a finisher for the franchise this season. RCB will take on Lucknow Super Giants in the Eliminator at the Eden Gardens in Kolkata on Wednesday (May 25).