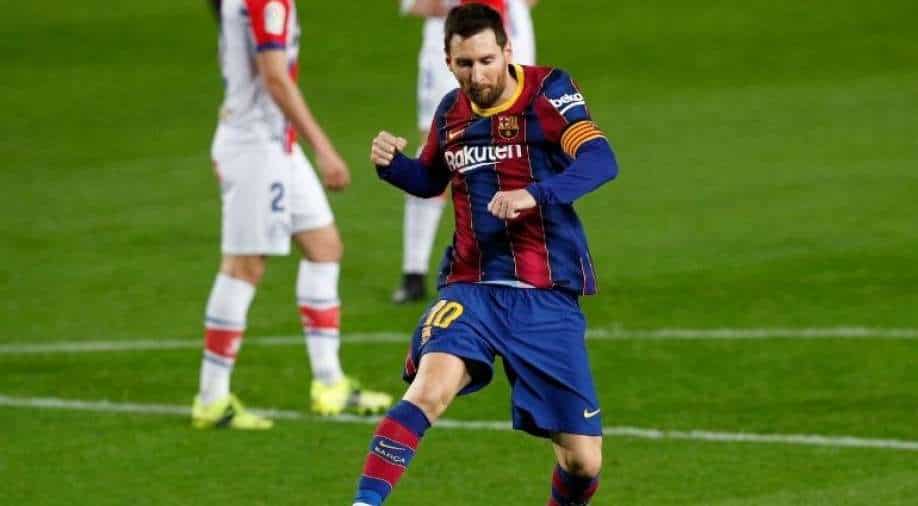 He rested Jordi Alba and started without Sergino Dest, Ousmane Dembele and Pedri but there was no rest for Messi, who unleashed a ferocious shot for his first goal.

Lionel Messi scored with two scorching strikes as Barcelona hammered Alaves 5-1 on Saturday in La Liga to warm up for their upcoming Champions League clash with Paris St Germain in style.

Portuguese forward Francisco Trincao put Barca in front after a cut-back from 18-year-old debutant midfielder Ilaix Moriba and Messi thought he had doubled the lead later on when knocking in on the rebound but the goal was ruled out for a marginal offside against Antoine Griezmann.

Messi then took matters in to his own hands from outside the area and thumped the ball off the far post with such venom that it landed just inside the opposite post.

Alaves's Luis Rioja pounced on a mistake by Ilaix to reduce the deficit in the second half but Barca came roaring back with a second strike from Trincao, another long-range missile from Messi and then a fifth goal crafted by Messi and Griezmann and finished off by left back Junior Firpo.

A seventh consecutive league win took Barca up to second in the standings on 46 points, eight behind leaders Atletico Madrid.

"Messi is in a fantastic moment of form," said Barca coach Ronald Koeman.

"We know how decisive he is and right now he is in the mood. With him playing in this form, everything is easier. If we want to beat PSG, we need Leo and everyone else at the top of their game."

Barca had suffered a painful 2-0 defeat to Sevilla in Wednesday's Copa del Rey semi-final first leg and Koeman rotated his side to make for fresher legs for Tuesday's first leg at home to PSG.

He rested Jordi Alba and started without Sergino Dest, Ousmane Dembele and Pedri but there was no rest for Messi, who unleashed a ferocious shot for his first goal.

He also sparked the move for Barca's third goal, racing on to a through ball and attempting to round keeper Fernando Pacheco, who succeeded in snuffing out Messi but could only parry the ball into the path of Trincao, who tucked it into the net.

Messi was hungry for a second goal of his own, however, and got one less than 60 seconds later, dribbling past two defenders outside the area and rattling a left-footed shot into the far corner.

Now toying with his prey, he released Griezmann with a delicious chipped pass and the Frenchman sent in a low cross for Firpo to complete the thrashing.

Koeman expressed his satisfaction with the team's performance after making several changes and said they were feeling confident ahead of Tuesday's showdown against PSG, who will be without an injured Neymar.

"We believe we can get through the tie. They have some injuries but so do we and we'll have to play very well to knock them out," added the coach.

"We have to be more efficient than ever in attack and strong in defence. I'm sure it'll be a marvellous game."