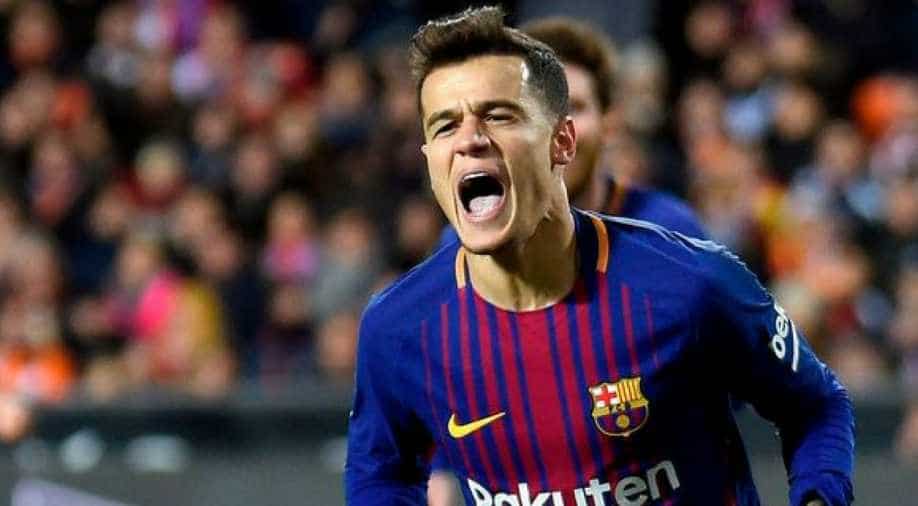 After a 2-0 defeat in Seville last week in which they rested key players, the Catalans broke the deadlock in the 13th minute when Coutinho slotted home from the penalty spot following Quincy Promes's foul on Lionel Messi.

Philippe Coutinho struck twice as Barcelona mounted a comeback to thrash Sevilla 6-1 and sweep into the Copa del Rey semi-finals 6-3 on aggregate on Wednesday.

After a 2-0 defeat in Seville last week in which they rested key players, the Catalans broke the deadlock in the 13th minute when Coutinho slotted home from the penalty spot following Quincy Promes's foul on Lionel Messi.

Messi handed Coutinho the ball and the Brazilian playmaker converted the spot kick, ending a run of poor form.

"Leo encouraged me to take the penalty and that helped me gain confidence," said Coutinho. "The gesture shows what a great person he is."

Sevilla nearly equalised but Jasper Cillessen produced a brilliant save from Andre Silva's backheel, before the Dutch goalkeeper palmed away Ever Banega's penalty.

Gerard Pique fouled Roque Mesa and after a long delay while the incident was checked by VAR, Argentina midfielder Banega fired to the goalkeeper's left, but Cillessen flew across to keep the ball out.

Barcelona pulled the game level on aggregate in the 32nd minute when Ivan Rakitic nudged the ball past Juan Soriano with the faintest of touches after a sensational pass from Arthur.

Two goals in a two-minute spell after the break helped Barcelona race ahead, with Coutinho heading in from Luis Suarez's cross and Sergi Roberto tucking home a ball from Messi.

Guilherme Arana pulled a goal back for Sevilla with a powerful drive after the otherwise impressive Cillessen gave the ball away, but Pablo Machin's side were finally sunk when Suarez struck on the break and Messi added a late sixth.

"Coutinho spoke with Messi and took the penalty, I'm happy for his goals," said Sergi Roberto.

"We want him to be happy and that's it. He's a very important player for us."

Earlier Real Betis, whose Benito Villamarin stadium will host the final in May, beat Espanyol 3-1 at home after extra-time to progress 4-1 on aggregate.

Leo Baptistao headed Espanyol in front after 33 minutes but Giovani Lo Celso equalised in the 76th minute before Marc Roca was dismissed for the visitors.

Betis capitalised on their numerical advantage in extra-time, with Sergio Leon and Aissa Mandi's strikes earning them a semi-final spot.