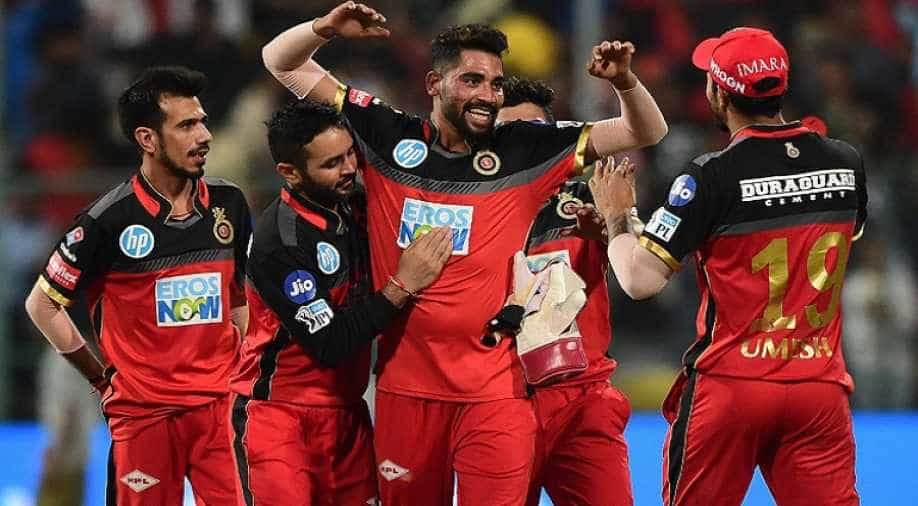 Bangalore players celebrates after winning the match against Hyderabad. Photograph:(PTI)
Follow Us

Bangalore defeated table-toppers Hyderabad by 14 runs in a must-win match to stay alive in the Indian Premier League at M. Chinnaswamy stadium.

Hyderabad skipper Williamson along with Manish Pandey forged a crucial partnership to take Hyderabad on the verge of another nail-biting win.

However, it was the hosts who clinched the issue to keep their playoff dream alive.

Chasing the massive 219-run target, Hyderabad openers Shikhar Dhawan (18) and Alex Hales (37) took their side to a quick start, accumulating 47 runs in the first five overs.

However, the decent start was short-lived as Yuzvendra Chahal drew the first blood for the hosts in the sixth over when Dhawan came down the track but chipped back to the bowler.

With addition of another 17 runs in Hyderabad`s scorecard, AB de Villiers took a stunning catch at deep midwicket to pack back Hales off a Moeen Ali delivery.

Skipper Williamson and Pandey then took the command, taking their side to touch the three-figure mark in 11.3 overs.

Meanwhile, the Hyderabad captain slammed his half-century off 28 balls, helping his side inch closer to the target.

The duo went on to forge a crucial 135-run partnership for the third wicket, lifting the visitors to 199 runs in 19.1 overs.

With 19 needed off the final over, Mohammed Siraj jolted Hyderabad dismissing the visiting skipper to bring back Bangalore in the game.

De Villiers smashed 69 runs off 37 balls while Ali made 65 off 34 balls before giving away their wicket in one over to Rashid Khan.

For Hyderabad, Basil Thampi registered the most expensive bowling figures in IPL history. He gave away 70 runs in four overs and took zero wickets.

Earlier, Kane Williamson ton the toss and opted to bowl against Bangalore as the two teams clash at M Chinnaswamy Stadium on Wednesday.