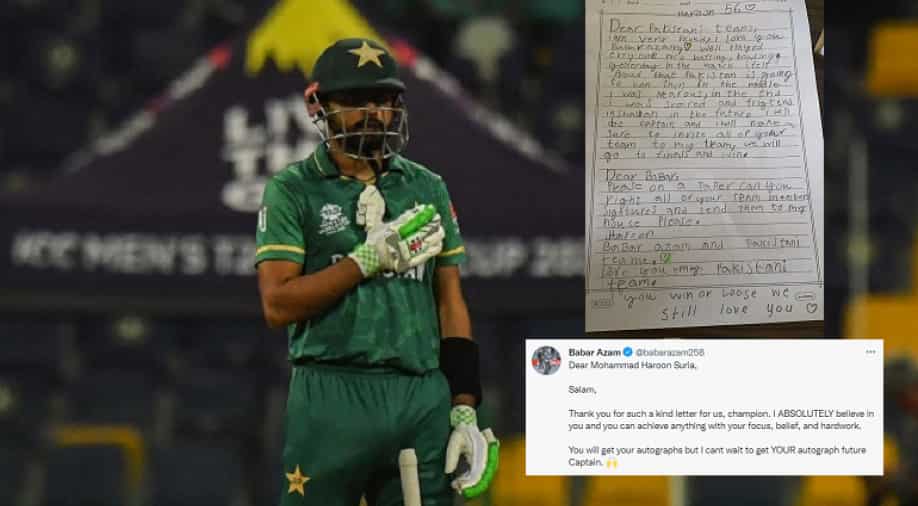 Pakistan captain Babar Azam has responded to an 8-year-old fan, who wrote a letter to him after his team's exit from the T20 World Cup 2021.

Pakistan enjoyed a stellar campaign in the T20 World Cup 2021 but failed to lift the coveted trophy as they bowed out after a five-wicket defeat at the hands of Australia in the semi-final. Pakistan had topped the points table in Group two with five wins in five matches but their unbeaten streak was ended by Australia in the semi-final on Thursday.

Pakistan's disappointing exit from the T20 World Cup left many of their fans back home heartbroken. An 8-year-old fan identified as Mohammad Harron Suria wrote a letter to Pakistan skipper Babar Azam and the rest of the team, praising them for their efforts in the T20 World Cup. A Pakistani journalist - Alina Shigri shared the letter from the 8-year-old on Twitter.

In his letter, the 8-year-old said he was a fan of Babar, and lauded the Pakistan team for their batting and bowling in the semi-final against Australia. The young fan perfectly encapsulated the emotions of millions of Pakistan fans, who were nervous in the dying moments of the semi-final against Australia. The 8-year-old said he thought Pakistan will win but was 'nervous' in the middle.

The 8-year-old concluded by stating that he would become the future captain of the Pakistan team and would invite all the current players to play with him. “I will make sure to invite all of your team to my team. We will go to the finals and win,” he wrote while also expressing his love for the Pakistan team.

“From a future captain to current captain @babarazam258,” wrote Shirgri while sharing the letter on Twitter.

From a future captain to current captain @babarazam258 I hope Babar Azam sends this 8-year old all the signatures @TheRealPCB @TheRealPCBMedia pic.twitter.com/jwociYh3Kb

The heartfelt letter from the young fan reached Pakistan captain Babar, who reacted to it and sent a beautiful message to the young fan, calling him the 'future captain' of Pakistan. Babar promised the fan that he will get the autographs of all players but he can't wait to get the 8-year-old's autograph.

"Thank you for such a kind letter for us, champion. I ABSOLUTELY believe in you and you can achieve anything with your focus, belief, and hard work. You will get your autographs but I cant wait to get YOUR autograph future Captain," Babar said.

Thank you for such a kind letter for us, champion. I ABSOLUTELY believe in you and you can achieve anything with your focus, belief, and hardwork.

You will get your autographs but I cant wait to get YOUR autograph future Captain. https://t.co/FbalPUeBnC

The letter has gone viral on social media and has touched the hearts of cricket fans. Pakistan played fabulous cricket in the T20 World Cup 2021 and came close to reaching the final before going down against Australia in a close encounter to exit.

The Men in Green defeated the likes of India and New Zealand in the Super 12 stages and remained unbeaten in the group stages to qualify for the semi-finals as the top team from Group 2.