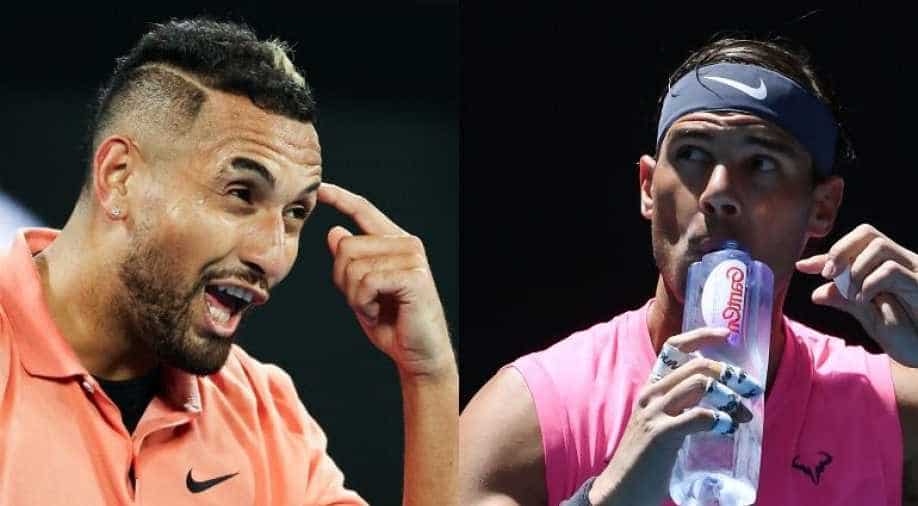 Their rivalry off-court began after Nadal was irritated with Kygrios' underarm serve in Acapulco last year, to which Nadal said that he 'lacks respect'.

Nick Kyrgios has reached the third round of the Australian Open in style, after beating Frenchman Simon Gille.

What caught the eye was both players mimicking Nadal's service routine when they were given time violations.

When @NickKyrgios tells you to get out, you get out.

Aussie tennis player Kyrgios's relationship with World No 1 Nadal has not been hidden from the world.

They share a sour relationship. Their rivalry off-court began after Nadal was irritated with Kygrios' underarm serve in Acapulco last year, to which Nadal said that he 'lacks respect'.

Following this, Nick did not hesitate to call the Spaniard 'super-salty'. During the Wimbledon match between the two, Kyrgios' bad behaviour during the match came in light.

Kyrgios has also criticised Nadal for the time he takes between points.

When he was asked about who did a better impression of the Spaniard, he said: "I don't wear underwear, so probably Gilles'."

The man who started it all lays down five aces to add $500 to #Aces4BushfireRelief.@NickKyrgios takes the first set 6-2.#AO2020 | #AusOpen pic.twitter.com/TnLQLbVTUa

The two have met 7 times on the tennis court, in which Nadal leads 4-3 over the Aussie. Kyrgios, However, edges past Rafael Nadal 2-1 on hard courts.

The two might not agree on everything, but one thing they stood together is for the relief efforts for Australian Bushfire relief workers. Nadal and Kygios have donated a generous amount for the relief funds in Australia.

Nadal, along with Roger Federer decided to donate $250,000 in the 'Rally for relief' initiative before the commencement of the tournament.

Aussie Showman promised A$200 per ace, he hit 28 aces against Simon.

Former tennis legend John McEnroe has also said he will contribute A$1,000 to the appeal for each set Kyrgios wins in the tournament.