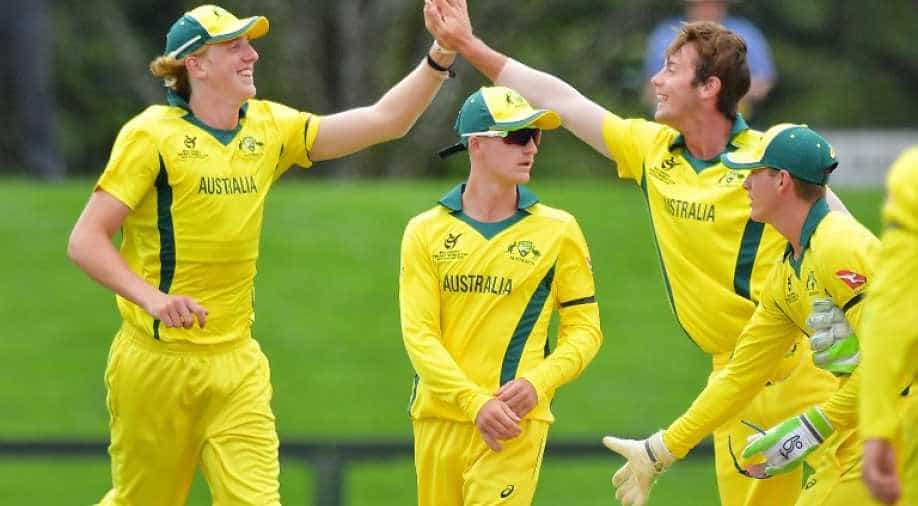 Australia cruised into the final of the Under-19 World Cup with an easy six-wicket win over Afghanistan at Hagley Oval in Christchurch on Thursday.

The three-time champions chased down Afghanistan's target of 182 at a canter, losing just four wickets as they reached it with more than 12 overs remaining.

Australian all-rounder Jonathan Merlo took four for 24 with the ball before opening batsman Jack Edwards smashed 72 in a man-of-the-match knock.

They will play the winner of Tuesday's semi-final between India and Pakistan in the tournament decider on Saturday.

Afghanistan has had a dream run at this year's tournament, defeating Pakistan and Sri Lanka in the group stages, then thrashing hosts New Zealand by 202 runs to make the final four for the first time.

But their batsmen failed to fire against Australia, leaving a spin-heavy attack little to defend.

Australia have just confirmed their tickets to Tauranga for the #U19CWC Final with a six-wicket win over Afghanistan!

"We did a bit of research on their spinners and thought it'd be a good idea to take the game to them," Edwards said. "Try to get them before they get us.

"The pitch was pretty slow, probably gave us a bit of time to read the spin, which helped."

But he played a lone hand and could not find a partner at the other end as regular dismissals prevented the Afghans from building any momentum.

They struggled to 86 for four at the halfway mark and hopes of a significant total ended when Ikram departed on 80.

Afghanistan ended their innings all out for 181 after 48 overs.

Defending a modest total, they did themselves no favours when they dropped Edwards on eight.

He went on to top score for the Australians, supported by Param Uppal, who was 32 not out.