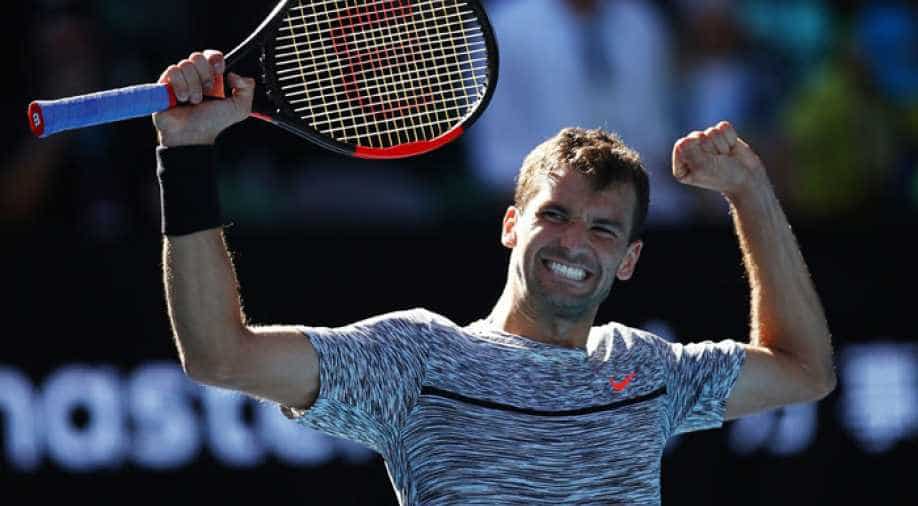 Dimitrov will go into a quarter-final with unseeded British player Kyle Edmund brimming with belief that a first grand slam title is within reach. Photograph:( Zee News Network )

Bulgarian Grigor Dimitrov kept cool in the Rod Laver Arena maelstrom to knock home favourite Nick Kyrgios out of the Australian Open in a fourth-round thriller on Sunday.

While Australia`s wait for a men`s champion will now stretch to 43 years, Dimitrov will go into a quarter-final with unseeded British player Kyle Edmund brimming with belief that a first grand slam title is within reach.

The 26-year-old showed enormous resilience and nerve to subdue a ferocious Kyrgios fightback, claiming victory after three hours and 26 minutes with a majestic forehand pass.

As the combatants embraced, Kyrgios told Dimitrov to "believe" before the defeated 22-year-old left to a standing ovation. A year ago it was jeers after a second-round meltdown.

"He deserves a lot of credit. He fought really hard and it`s one of the matches you have to be locked in."

The prime-time clash crackled with intensity from the get-go with Dimitrov`s elegant style contrasting with the explosive shot-making of maverick 17th seed Kyrgios.

"Oh Nicky you`re so fine, you`re so fine you blow my mind" was one of the chants sung by the gold and green clad fans there to support a player fast winning over his critics.

Even the seagulls on the roof of the arena appeared transfixed on the drama unfolding below.

While Kyrgios`s histrionics are well chronicled, all the talk this past week has been the fact that he appears ready to fulfil his vast potential, especially after a superb victory over his idol Jo-Wilfried Tsonga in round three.

Dimitrov, who won the ATP Finals last year, had to play high-octane tennis to take a high-quality opener in a tiebreak.

Kyrgios`s only lapse arrived at 3-3 in the second set when he bunted a backhand long to hand Dimitrov a break point and then casually messed up a volley.

For a few minutes it seemed Kyrgios might unravel but his growing maturity was evident as he re-grouped and seized on a tight service game by Dimitrov at 5-4, saving a set point, before breaking back to huge roars from the crowd.

Dimitrov is made of stern stuff these days though and edged another tiebreak. He constructed a beautiful point, finishing a long rally with a stealthy volley, to move 3-1 ahead.

Kyrgios belted away a backhand and then whipped away a forehand to drag it back to 4-4 but Dimitrov replied with a punishing forehand down the line to move 5-4 ahead before a couple of Kyrgios errors gave the Bulgarian a two-set lead.

Despite the deficit, Kyrgios`s body language bristled with intent and he took the third set after breaking at 2-2.

The comeback looked on as Kyrgios cranked up his serving power, belting down four aces to level at 2-2 in the fourth.

Yet the 22-year-old Australian`s hopes looked toast when he buried a smash into the net to hand Dimitrov a 5-3 lead.

The drama was not over though as Dimitrov wobbled when serving for victory. He served a double fault at 15-30 and then watched a backhand fly past him as Kyrgios broke back.

Dimitrov recovered his poise with a love hold but Kyrgios replied in kind with a 36th ace to force another tiebreak.

Once again it was Dimitov`s calm under pressure that was key as he put together another clinical tiebreaker to take victory.