AUS vs BAN, T20 World Cup 2021 prediction: Who will win today's match between Australia and Bangladesh? 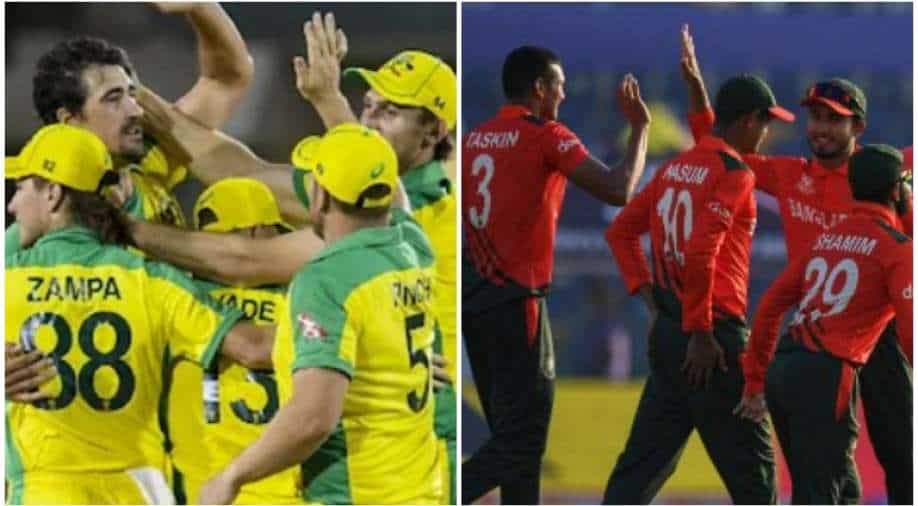 T20 WC: Who will win today's match between Australia and Bangladesh? Photograph:( AFP )

Australia and Bangladesh will square off with each other in match 34 of the T20 World Cup 2021 edition, being held in the UAE, on Thursday (November 4). This will be the first game of the day, with West Indies set to face Sri Lanka in the evening encounter. The Australia-Bangladesh tie will be held at the Dubai International Cricket Stadium, Dubai.

Talking about both sides' campaigns so far, the Aaron Finch-led Australia started with back-to-back wins as they edged past South Africa in their tournament-opener before thrashing Sri Lanka by 7 wickets. However, they had their litmus test versus the Eoin Morgan-led England side, against whom they fell like nine pins to lose by 8 wickets. Given that England already have one foot in the semi-finals and South Africa are now on a roll, the Aussies cannot afford any slip-ups and will like to win by a big margin to improve their NRR (which can be decisive eventually).

On the other hand, Bangladesh have once again surrendered meekly in another T20 WC. They lost an intense game versus the Sri Lankans before losing to England convincingly and against West Indies by a whisker. They are coming into this game on the back of a 6-wicket loss versus South Africa, where they were bundled out for a paltry 84.

Match prediction: A day will ensure that dew doesn't play a big role. Hence, teams might not be necessarily looking to chase, which has been the norm in the tournament. Moreover, teams batting first have now won the last three encounters as well. While spin does play a role, the batters too have a lot to extract from the surface in Dubai (as witnessed in the NZ vs Scotland game). Expect the contest between Bangla Tigers' top-order versus the Aussie pacers to determine the outcome of the contest.

An Australia win on the cards, given Bangladesh's poor run?