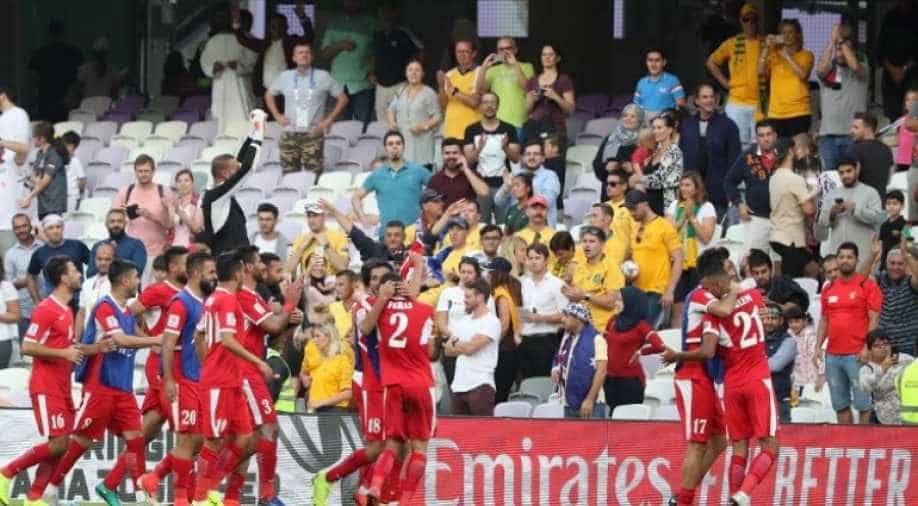 Jordan's goalkeeper Amer Shafi (up) and his teammates celebrate after winning. Photograph:( AFP )

Australia next face Palestine on January 11 while Jordan will take on Syria.

Australia's Asian Cup title defence suffered a huge blow on Sunday when they were stunned 1-0 by Jordan in their worst ever start to the competition.

Graham Arnold's youthful side had confidently predicted victory in their Group B opener but they were undone by Anas Bani-Yaseen's powerful first-half header.

Australia, who had 76 percent of possession but only six shots on target, were thwarted by a brilliant double save from Jordan's Amir Shafi in the game's dying moments.

It left the injury-hit Aussies with much to ponder ahead of Friday's game against Palestine, when they will need a win to get their campaign up and running.

Arnold, who led Australia to the 2007 quarter-finals in his first stint as Socceroos boss, called the goal "sloppy" and rued a slow start at the Hazza Bin Zayed Stadium.

"It was one of those days, a frustrating day when the ball just didn't seem to bounce," he said, adding: "If you're going to lose a game, it's better to lose your first game.

"It's a wake-up call... it's all about where we can improve. We'll get over it very quickly."

"I told them today, 'God gave you something', and today they were playing for the people of Jordan," said Borkelmans.

"They were running like they had three lungs," he added.

Australia bossed the opening exchanges but their Brighton 'keeper Mat Ryan made the first save when he kept out Yousef Rawashdeh at his near post after Luongo was dispossessed.

The youthful Socceroos had plenty of possession in the opposition half but rarely threatened, while Jordan were intent on breaking Australia's flow and seeking chances on the break.

Their goal came from a corner on 26 minutes, when defender Bani-Yaseen escaped Luongo's marking and put a thumping header into the top corner, prompting jubilation in the strongly pro-Jordan crowd of just under 5,000.

Suddenly Australia were rocking and three minutes later, they were grateful for Ryan's finger-tip save as he pushed Baha Abdelrahman's free kick onto the bar.

In the second half, Arnold brought on Rhyan Grant and then Chris Ikonomidis to find a way through Jordan's defence.

Celtic forward Tom Rogic's stinging shot was kept out by Shafi, before Ikonomidis's attempt at a follow-up was smothered by the defence.

Rogic passed up an opportunity for the equaliser on 72 minutes, when he was free in the box but scooped his shot well over from Aziz Behich's cross.

Six minutes later, the lively Mabil smashed one off the upright with Shafi beaten, before Ikonomidis's header was scrambled off the line.

Jamie Maclaren had a goal chalked off for offside and with the last action of the game, Shafi denied both Ikonomidis and Jackson Irvine, capping Australia's misery and triggering joyful celebrations among the Jordanians.