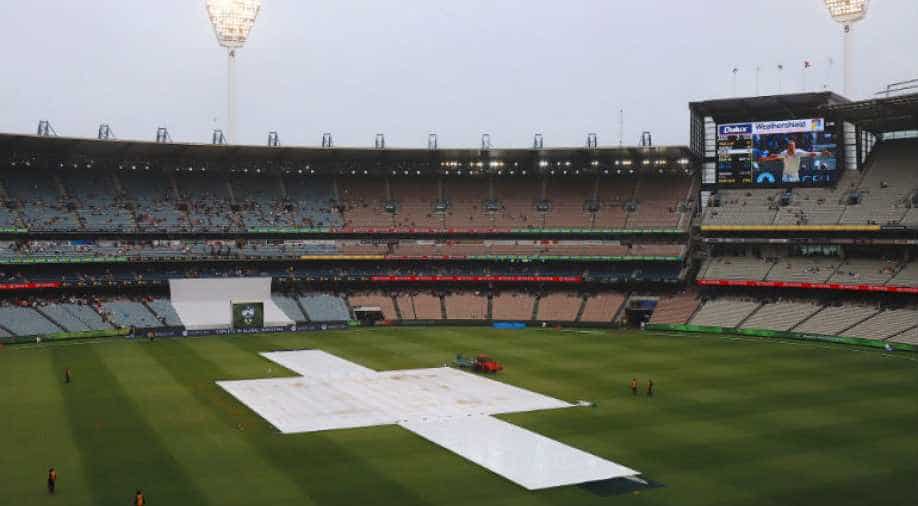 Covers can be seen over the pitch during a rain delay on the fourth day of the fourth Ashes cricket test match. Photograph:( Reuters )

A morning that brought two wickets for England and a sniff of a drought-breaking Ashes win gave way to a bleak afternoon for the tourists on Friday as rain washed out most of day four on Friday and left Australia well-placed to save the fourth test.

The home side were 102 for two in their second innings at the Melbourne Cricket Ground when rain interrupted play before tea and the showers lingered long enough for umpires to abandon the day without another ball bowled.

David Warner was 40 not out, with captain Steve Smith on 25 and Australia still needing another 61 runs to make England bat again.

But even with the promise of reverse swing, Joe Root`s bowlers face a big task on an unresponsive pitch to prevent Australia's batsmen from batting them out of the game.

"(The pitch) is getting slower," Australia coach Darren Lehmann told host broadcaster Channel Nine. "It`s tough work for a new batter. So once you`re in, you`ve got to stay in.

"Our boys are fighting really hard. A couple of good (England) balls to get the wickets and Smith and the vice- captain (Warner) went about their work."

Australia regained the Ashes after the third test in Perth and hold an unassailable 3-0 lead in the series but England had hope of cracking a first win after Alastair Cook's unbeaten 244 propelled them to a first innings lead of 164.

They had resumed their first innings on 491-9 in the morning but were unable to extend their total, with tail-ender James Anderson dismissed first ball by paceman Pat Cummins, fending a catch straight to Cameron Bancroft at short leg.

That left former captain Cook unbeaten on his overnight score, a record total among openers who have carried their bat through an innings.

Cook became the 46th player to achieve the feat in tests and also the first England batsman to do so in 20 years, since Mike Atherton's 94 not out against New Zealand in Christchurch in 1997.

Australia's second innings began brightly on a cloudy but dry morning, with England losing a review for a caught behind decision when opener Bancroft played at a Tom Curran ball in the seventh over of the innings.

However, the tourists seamers struck twice to leave Australia wobbling at 65-2 before Warner and Smith showed patience and poise in their unbroken stand of 38.

All-rounder Chris Woakes made the early breakthrough, bowling Bancroft for 27, with England quick Anderson having number three Usman Khawaja caught behind for 11.

Australia resumed on 70-2 after lunch but added only 16 runs before the first rain interruption.

Play was soon back on but only another 33 minutes were possible before the session was brought to a premature close.