Ashes 2019: Australia's Steve Smith out of second Test with concussion 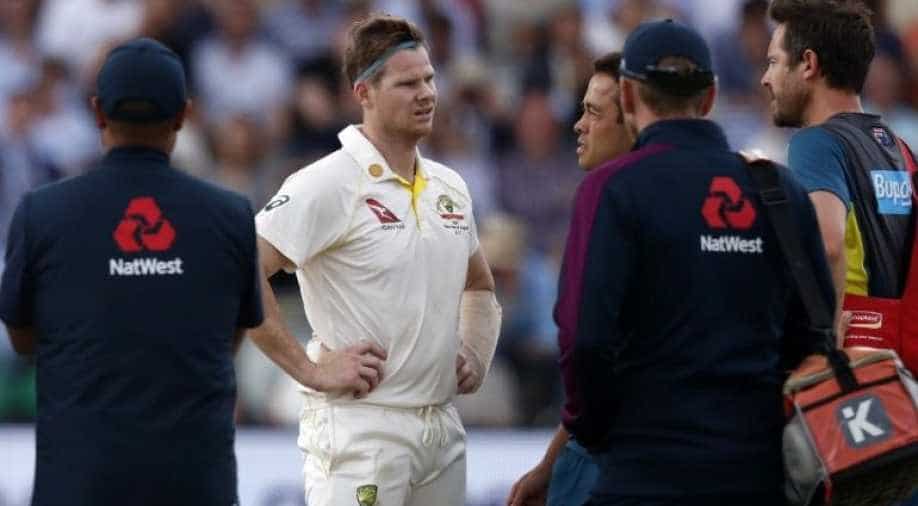 Australia's Steve Smith (2nd L) is assessed by medical staff after being hit on the neck by a ball off the bowling of England's Jofra Archer (unseen) during play on the fourth day of the second Ashes cricket Test match. Photograph:( AFP )

Australia's Steve Smith has been ruled out of the last day of the second Ashes Test against England at Lord's on Sunday with concussion, Cricket Australia (CA) have announced.

Smith was hit by a Jofra Archer bouncer on Saturday and although he resumed his innings after retiring hurt, further tests saw CA deem him unfit to play on Sunday with his participation in the third Test, which starts on Thursday, also in doubt.

"Steve has been closely monitored by medical staff overnight and this morning reported that after sleeping well, he woke with 'a bit of a headache and a feeling of grogginess'," said am Australian team spokesman.

The series is the first being played under the International Cricket's new concussion substitute regulations, part of the inaugural World Test Championship, which allow players who have suffered head or neck injuries to be replaced fully by a substitute, who was previously restricted to fielding alone.

Marnus Labuschagne, on the field as 12th man when play resumed Sunday, became the first concussion substitute in Test history after Australia's request was approved by match referee Ranjan Madugalle.

Labuschagne can now bat or bowl in Smith's place if required, unlike traditional substitutes who were restricted to fielding.

There are doubts whether star batsman Smith will feature in the third Test at Headingley starting on Thursday. The spokesman saying "the short turnaround is not in his favour".

Smith was hit by an Archer bouncer when on 80 on Saturday and retired hurt.

He resumed his innings at the fall of the next wicket after 46 minutes off the field, and was eventually out for 92 -- the first time this series he had been dismissed for fewer than 100 runs.

Steve Smith has been subbed out of day five and appears in doubt for the third #Test.

The spokesman added: "Steve reported that his left arm which was also struck (by Archer) during his innings yesterday was 'much better'.

The spokesman added that as part of further testing on Sunday, Smith "demonstrated some deterioration" from his testing which was consistent with the emergence of the symptoms he was reporting.

"On that basis Steve has been withdrawn from the match by team doctor Richard Saw," the spokesman said.

Explaining how Smith had been allowed to resume his innings, the spokesman said: "It is not uncommon for players to pass their tests and feel well on the day of an injury and then display symptoms 24-48 hours later.

"Steve's fitness will be assessed on an ongoing basis.

"Steve will undergo a precautionary scan on his neck on Sunday."

Australia, bidding for their first Ashes campaign triumph on English soil in 18 years, lead the five-match series 1-0 after a 251-run win at Edgbaston last week.

In that match, former captain Smith marked his first Test since completing a 12-month ban for his role in a ball-tampering scandal in South Africa with superb innings of 144 and 142.

After rain delayed Sunday's start by over an hour, England resumed on 96-4 in their second innings, a lead of 104 runs.