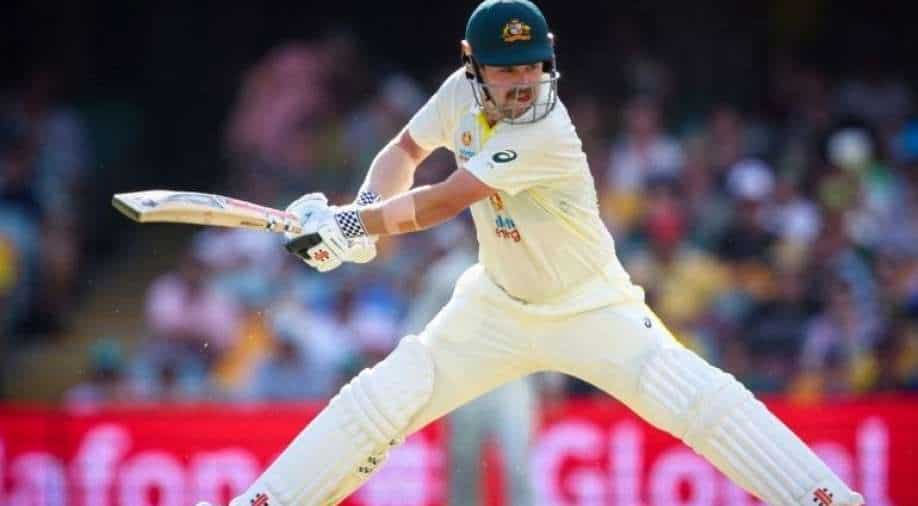 Travis Head smashed a T20-style century, an unbeaten 112 from 95 balls that pushed Australia to 343 for seven, a commanding 196-run lead over England. Photograph:( AFP )

Travis Head smashed a T20-style century, an unbeaten 112 from 95 balls that pushed Australia to 343 for seven, a commanding 196-run lead over England.

Travis Head smashed a T20-style century to put Australia firmly in control of the first Ashes test on Thursday as England were hit by an injury crisis during a miserable day two in the field at the Gabba.

David Warner fell six runs short of what would have been a fortuitous century but Head kept the blowtorch on with an unbeaten 112 from 95 balls that pushed Australia to 343 for seven, a commanding 196-run lead over England's paltry first innings 147.

An #Ashes hundred at the Gabba and what it means 🔥

Tail ender Mitchell Starc was 10 not out at the end of a day of sapping heat and humidity in which the problems piled up for Joe Root's England.

Talismanic all-rounder Ben Stokes was all but scratched from the attack by an apparent knee strain in the morning while paceman Ollie Robinson came off the ground after barely getting through one of his overs after tea.

ALSO READ: Virat Kohli was given 2 days to resign as ODI captain before BCCI announced Rohit as his successor: Report

England bowling coach Jon Lewis would not be drawn on whether Stokes would be able to bowl for the rest of the match.

"Obviously Ben has hurt himself on the field today," he said of Stokes, who was playing his first competitive match since July after taking a mental health break from cricket.

"We'll assess him overnight and see how he pulls up in the morning."

The burden of the attack fell heavily on seamers Mark Wood and Chris Woakes late in the day, while spinner Jack Leach and part-timer Root were feasted on by Head.

Leach conceded 95 runs from his 11 overs and was lucky to pick up a wicket when Marnus Labuschagne fell for 74 slicing straight to point.

Head was a rock as he anchored partnerships with debutant wicketkeeper Alex Carey and his captain Pat Cummins.
He showed plenty of toughness too.

After taking a painful blow to his left forearm from Wood before reaching 50, Head then took another hit from the quick after raising his third test century, the ball pinging off his glove and whacking him on the chin.

"I can’t quite work out what quite transpired in the last couple of hours. Hopefully we’ve put ourselves in a nice position.

"We've had two great days and in Australia I guess you want to keep guys out there as long as possible."

Warner had earlier marched to the brink of a century after being reprieved three times in the field but was finally out for 94 straight after tea, undone by a slower ball from Robinson that induced a catch in the covers.

Warner and Labuschagne combined for a 156-run partnership which set the platform for Head's late slogging.

The day may have taken a different hue were it not for a controversial tech failure.

Warner was bowled by Stokes for 17 in the morning but it was found to be a no ball on review, with the all-rounder overstepping his mark.

ALSO READ: 'He’s not much of a captain' - Chappell slams Joe Root after England's flop show on Day 1 of Ashes 2021 opener

TV pictures showed Stokes had overstepped on three successive deliveries before that but he was unable to correct his run-up because none of them were called.

Warner was later dropped in the slips on 48 by Rory Burns, who is having a dreadful test after being bowled first ball of the series on Wednesday by Mitchell Starc.

Veteran opener Warner later went for a suicidal single after hitting straight to bat pad, then slipped over and dropped his bat as he tried to get back to safety.

Haseeb Hameed was just metres away but threw wide of the stumps.