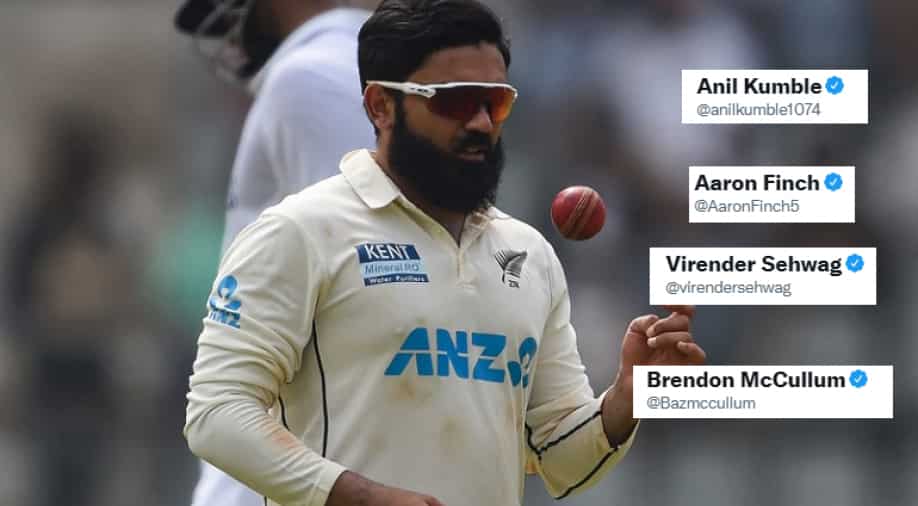 Legendary Indian spinner Anil Kumble and others lauded New Zealand's Ajaz Patel as he became the third bowler in Test history to pick up all ten wickets in an innings.

New Zealand spinner Ajaz Patel created history on Saturday (December 04) as he picked up all ten wickets during India's first innings of the ongoing second Test between the two sides at the Wankhede Stadium in Mumbai. Patel became the third bowler after the legendary Anil Kumble and Jim Laker to take all ten wickets in a Test innings.

On Day 2 of the second Test between India and New Zealand at the Wankhede Stadium in Mumbai, Patel became the first bowler to claim all ten wickets in a Test innings away from home after dismissing Indian tail-ender Umesh Yadav. Patel had picked up four wickets on Day 1 of the Test match and scalped the remaining six wickets on Day 2 to script a historic feat.

Cricketers from across the globe took to social media to laud the New Zealand left-arm spinner for his amazing effort. Kumble himself tweeted for Patel and welcomed him to the club of bowlers with a ten-wicket haul in a Test innings.

"Welcome to the club #AjazPatel #Perfect10  Well bowled! A special effort to achieve it on Day1 & 2 of a test match. #INDvzNZ," tweeted Anil Kumble. The likes of Brendon McCullum, Virender Sehwag, Aaron Finch and several others lauded Patel for his bowling heroics in the Mumbai Test against India.

Welcome to the club #AjazPatel #Perfect10 Well bowled! A special effort to achieve it on Day1 & 2 of a test match. #INDvzNZ

One of the most difficult things to achieve in the game. 10 wickets in an innings. A day to remember for the rest of your life, #AjazPatel . Born in Mumbai, creating history in Mumbai.
Congratulations on the historic achievement. pic.twitter.com/hdOe67COdK

That’s the most amazing thing I’ve ever seen!! Ajaz Patel….what a phenomenal performance

Sensational! Just sensational!! To take all 10 wickets in a Test innings is the stuff dreams are made of. Take a bow, Ajaz Patel, you are in the elite company of Jim Laker and Anil kumble. And to do it in the city of your birth, wow!! pic.twitter.com/iA6biAC4gz

Also Read: R Ashwin signals for DRS after getting bowled, gets trolled by former Australian cricketer

Despite Patel's ten-wicket haul, India managed to post a strong total on the board with the help of a brilliant knock from Mayank Agarwal, who scored 150 runs off 311 delieveries laced with 17 fours and four sixes. Agarwal's 150 along with crucial contributions from the likes of Axar Patel (52) and Shubman Gill (44) helped India post 325 runs on the board in their first innings.

Indian bowlers then dominated the proceedings during New Zealand's first innings and were quick to reduce the visitors to 51/6 inside 18 overs to further tighten their grip on the series-opener.