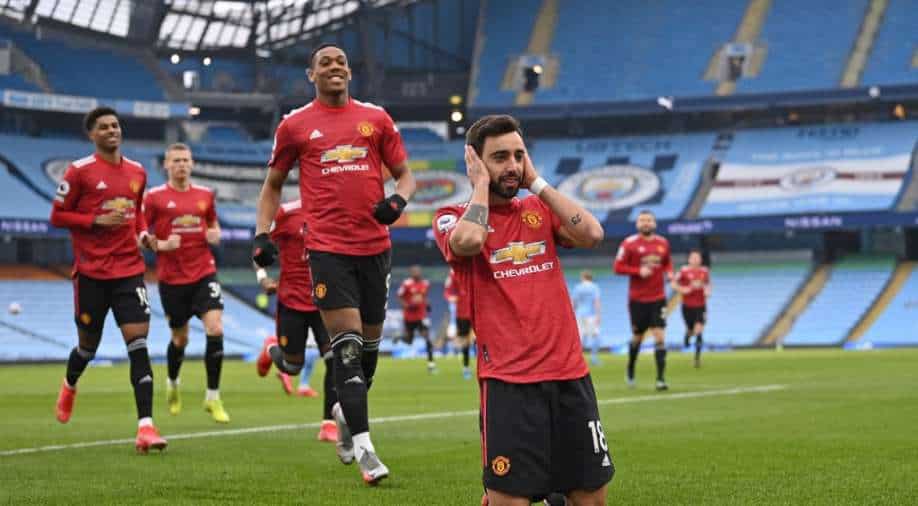 Bruno Fernandes hailed an "almost perfect" performance from Manchester United to end Manchester City's 21-match winning streak in all competitions with a 2-0 derby win at the Etihad on Sunday.

"Today we did almost everything perfect," said Fernandes. "The league is not a sprint, this is a marathon. We have to do our best and not think about others."

United boss Ole Gunnar Solskjaer admitted a landmark win for his side has almost certainly come too late to reignite the Premier League title race.

But just a third win in nine league games takes United back above Leicester and opens up an eight-point cushion in the battle to secure a top-four finish.

"They are too far (ahead) to think we can catch them," said Solskjaer.

"Even today they put you under so much pressure you see you are playing against a very good team."

City had not even trailed in a Premier League match for 20 games stretching back to their last defeat to Tottenham in November.

However, the visitors were gifted the lead after just 34 seconds when Gabriel Jesus's clumsy challenge on Anthony Martial saw referee Anthony Taylor point to the spot.

Fernandes has failed to match the extremely high standards he has set as United's key man in recent weeks, but the Portuguese midfielder has maintained his dead eye from the penalty spot and his strike had too much power for Ederson.

Shaw then stung Ederson's palms with City still shell-shocked by their slow start.

"We played good apart from the first 10 minutes," said City boss Pep Guardiola. "Unfortunately we could not be clinical up front.

"The news is not today, the news is 21 victories in a row. This result is going to help us a lot to understand how difficult it is. The important thins is the next one. There are 30 points to play for and we need to win again."

Guardiola's men began to take control as the first-half wore on, but Dean Henderson was only forced into a couple of routine saves by Ilkay Gundogan.

The hosts came much closer at the start of the second period when Rodrigo side-footed against the post after a patient build-up involved Riyad Mahrez and Jesus.

Seconds later, City were caught out by a brilliant United counter-attack as Shaw ran from inside his own half, exchanged passes with Marcus Rashford, and then fired into the far corner for the Red Devils' first goal from open play against a traditional top six opponent in eight league games this season.

Solskjaer's men beat City in both meetings at the Etihad last season by picking their neighbours off on the break and used the same tactic to great effect for another fine win.

Martial should have ensured a much greater margin of victory as he twice fired too close to Ederson with just the goalkeeper to beat.

City had the chances to at least avoid defeat in the closing stages as substitute Phil Foden sliced wide from point-blank range before Raheem Sterling completely missed a tantalising cross from Kyle Walker with the chance to score his first goal against United.

But after plenty of criticism for a string of 0-0 draws against stronger opponents, United delivered a result to back up executive vice-chairman Ed Woodward's message this week that the progress being made under Solskjaer is "clear" and he remains the man to lead them back into title contention next season.

"We've gone back to what we want to be," added Solskjaer. "A more direct, attacking, positive team."