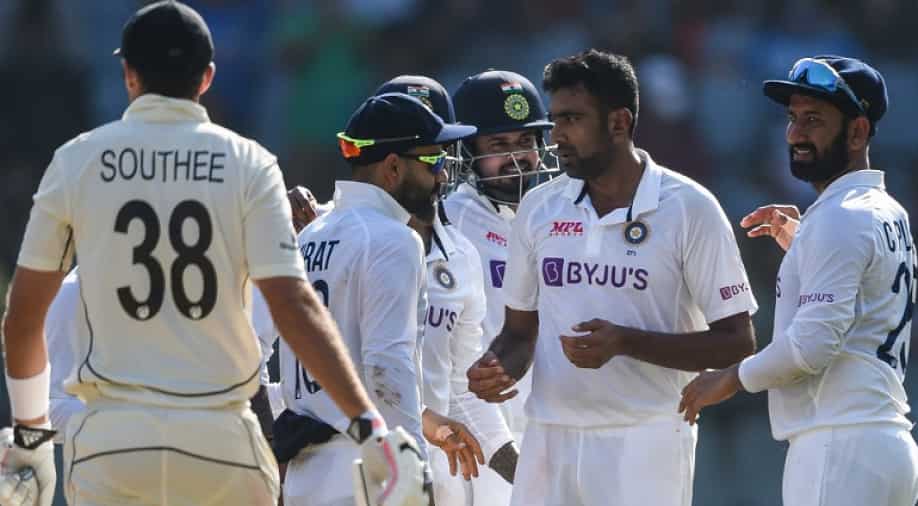 Team India skittled out New Zealand for a paltry 62 in their first innings of the ongoing second Test between the two sides at the Wankhede Stadium in Mumbai. It is the lowest Test total against India by any team in the history of the game.

Indian bowlers ran riot in the first innings against New Zealand in the ongoing second Test between the two sides at the Wankhede Stadium in Mumbai on Saturday. India bundled out the Kiwis for a paltry 62 after posting 325 runs on the board in their first innings as R Ashwin and Mohammed Siraj combined to run through the New Zealand batting line-up.

Ajaz Patel stole the show during India's first innings as he picked up a historic ten-wicket haul and became the only third bowler in the world after the legendary Anil Kumble and Jim Laker to pick up all ten wickets in a Test innings. However, despite his heroics, India managed to post a strong total of 325 runs on the board with the help of Mayank Agarwal's brilliant knock of 150 runs.

Ajaz's efforts went in vain as the New Zealand batting line-up failed to capitalise in their first innings and fell like a pack of cards at the Wankhede Stadium. Ashwin picked up a four-wicket haul while Siraj took three wickets to skittle out the Kiwis for 62 and hand India a massive lead of 263 runs in the game.

It was a brilliant display by the Indian bowling unit as New Zealand batters had no anwsers to the hosts' brilliance. While Siraj ran through the top order by dismissing the likes of Latham, Will Young and Ross Taylor, Ashwin wreaked havoc on the tail by picking up the wickets of Tom Blundell, Henry Nicholls, Tim Southee and William Somerville.

Axar Patel and Jayant Yadav picked up two and one wicket respectively. India decided not to enforce the follow-on against New Zealand and came out to bat for their second innings on Day 2.