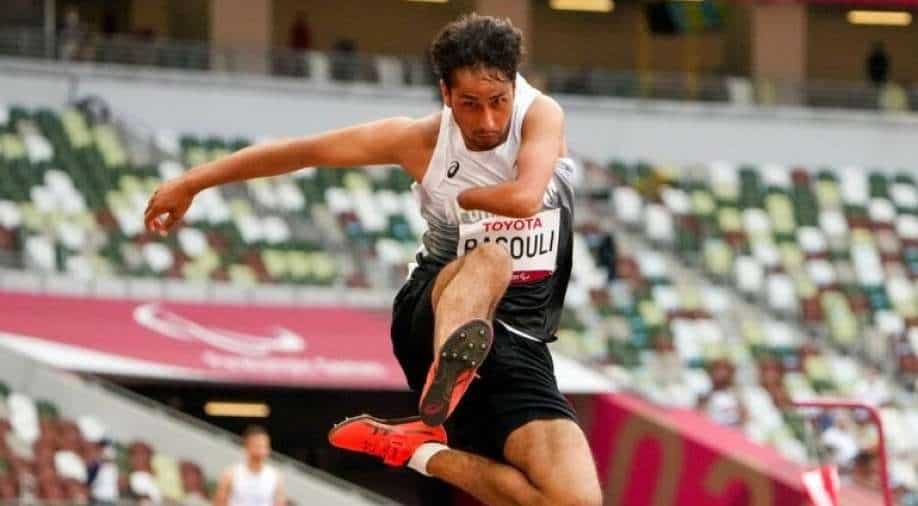 Rasouli, whose left hand was amputated after a mine explosion, finally made the much-awaited appearance of Afghanistan's appearance at the Tokyo Paralympic Games.

It was a moment of joy when Hossain Rasouli, an athlete from Afghanistan, appeared on track at the ongoing Tokyo Paralympic Games 2020 and pointed towards the Afghanistan Paralympic Committee logo on his white vest on Tuesday (August 31).

Rasouli was competing in the men's T47 long jump final and his name was at 13th place on the start list. Although, he finished last but definitely spread a message of hope on one of the most decorated global platforms.

Rasouli, whose left hand was amputated after a mine explosion, finally made the much-awaited appearance of Afghanistan's appearance at the Tokyo Paralympic Games.

As he was too late to compete in his favoured T47 100m event, he entered the long jump final and recorded jumps of 4.37, 4.21 and 4.46. It did not win him a medal, but the attempts were long enough to cross physical, mental and political hurdles.

Another long jumper Roderick Townsend said he didn't feel rivalry but "joy" as he said Rasouli's participation was symbolic and this is what  Paralympic Games "stands for".

Rasouli is one of the two Paralympians who were evacuated from Afghanistan, arriving in Tokyo with team-mate Zakia Khudadadi on Saturday (August 29), after catching a secret flight from Paris one week after being evacuated from Kabul.

The best 13th place ever: Afghanistan Paralympian, Hossain Rasouli, a 100 metre runner who missed his event because he was fleeing the Taliban in Kabul, competes in the long jump instead and sets a PB💪 #Tokyo2020 #Paralympics pic.twitter.com/cdC0RVmK5l

Rasouli left the stadium without speaking to reporters officials have said Afghan Paralympians will not be speaking to the media during the Paralympic Games.

A couple of days ago, Andrew Parsons, the president of the International Paralympic Committee (IPC) said he was able to see the Afghan athletes in person after they arrived, and promised that the IPC would "provide everything in our capacity" to ensure "the safest" and "calmest" environment for them to focus on their competitions.

The athletes were due to arrive in Tokyo on August 17 but they could not travel to Japan after the Taliban took control over the country, routing government forces.

They had missed the opening ceremony of the Tokyo 2020 Paralympic Games on Tuesday (August 24), however, their country's flag was carried during the event, spreading a "message of solidarity and peace".

Khudadadi will make her first appearance in the women's taekwondo K44 -49kg category on Thursday.