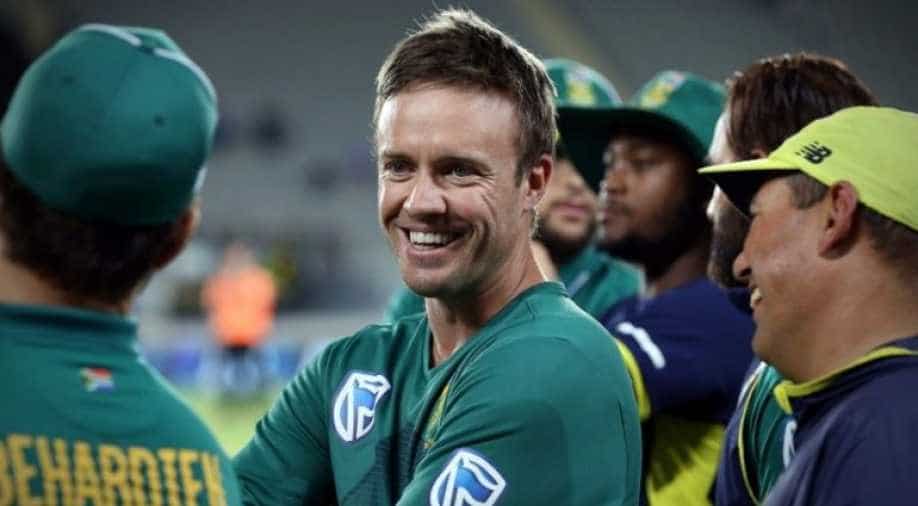 South African batsman, AB de Villiers, made an impressive debut in England's domestic T20 competition Vitality Blast as he played a match-winning knock of 88 runs for Middlesex on Thursday.

De Villiers kept on hammering Essex bowlers all around the park and he went on to score 88 runs off just 43 balls.

This knock by the right-handed batsman enabled Middlesex to register an easy win by seven wickets with three overs to spare.

Chasing 165, Middlesex had gotten off to a bad start as they lost their first two wickets with just 39 runs on the board.

De Villiers came out to bat at number four and he along with Dawid Malan stitched together a 105-run stand to take Middlesex closer to victory.

Malan departed after playing a knock of 43 runs, but de Villiers ensured that the team registers a victory by seven wickets and with 18 balls to spare.

Earlier, after being put in to bat Essex kept on losing wickets at regular intervals and it was only due to Dutch player Ryan ten Doeschate knock of 74 runs that the team was able to post 164 runs on the board.

AB de Villiers has been surrounded by controversy as during the recently concluded ICC Men's World Cup, Cricket South Africa's (CSA) selection panel had revealed that AB de Villiers wanted to make his way back into the World Cup squad on the day of announcement of the team.

However, after South Africa failed to make it to the semi-finals of the World Cup, de Villiers released a statement saying there was no contact between him and CSA after his retirement from international cricket.

He added that he made no demands from either the selection panel or skipper Faf Du Plessis.

"During the weeks and months that followed, there was no formal contact between Cricket South Africa or the Proteas and me. I didn't call them, and they didn't call me. I had made my decision and the Proteas moved on, enjoying success under the expert guidance of coach Ottis Gibson and the outstanding captaincy of Faf du Plessis," de Villiers had said.

"Faf and I have been friends since we were at school together and, two days before the World Cup squad was announced, I contacted him for a chat. I had been in decent form during the Indian Premier League and casually repeated what I had said when asked a year earlier, that I was available if required... but only if required. I made absolutely no demands," he added.

De Villiers had announced his retirement from international cricket on May 23, 2018.