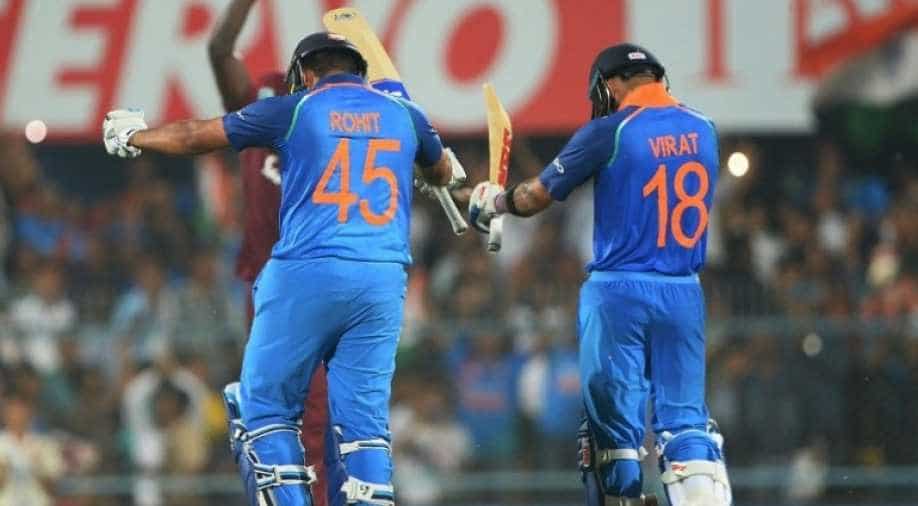 Sharma slammed a six on the first ball of the 43rd over to reach his 150 and also give India an 8-wicket victory in the first ODI on Sunday.

Rohit Sharma's unbeaten 152 and skipper Virat Kohli's 140 helped India chase down the mammoth target of 323 runs set them by the West Indies.

Sharma slammed a six on the first ball of the 43rd over to reach his 150 and also give India an 8-wicket victory in the first ODI on Sunday.

After India lost Shikhar Dhawan early, both Kohli and Sharma had put on a 246-run stand for the second wicket to put 'Men In Blue' in a commanding position.

The two were on the way of breaking several partnership records but unfortunately, Kohli departed by a brilliant lbw off wicketkeeper Shai Hope off Devendra Bishoo.

But, Sharma continued to lead the team and play a perfect match-winning knock, stocked with  15 boundaries and eight sixes in 117-ball inning.

Kohli, on the other hand, played 107 balls and hit 21 boundaries and two sixes.

Despite setting a huge target and getting an early break, the Jason Holder's side failed to perform with the ball.

Oshane Thomas, who took Dhawan's wicket, turned out to be the most expensive bowler. At an economy of 9.22, Thomas gave 83 runs in his nine overs.

Bishoo, who dismissed Kohli, was the second most expensive bowler with 73 runs in 10 overs bowled.

No other bowler was even able to understand the Indian batsmen strategy and were routed by Rohit and Kohli.

For West Indies, Shimron Hetmyer slammed a century to bring his side back into contention against the 'Men in Blue'.

After being reduced at one time to 86 for the loss of three wickets, Hetmyar took the driver's seat and slammed a 78-ball 106, before giving away his wicket to Ravindra Jadeja trying to hit a six. He was caught by Rishabh Pant.