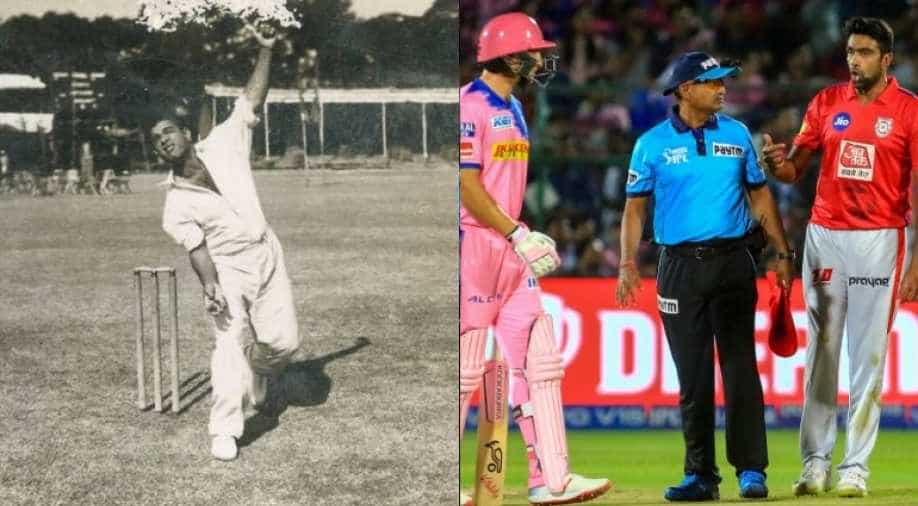 File photo of Vinoo Mankad (L) and the R Ashwin (R) and Jos Buttler. (Image via Twitter and IANS) Photograph:( Others )

Mankad was among the earliest bowlers to run a non-striker out. The incident dates back to 13 December 1947 during India's tour to Australia.

Jos Buttler's run-out at the non-striker's end during Rajasthan' home game against Punjab on Monday was the first instance of a batsman being 'mankaded' in the Indian Premier League (IPL).

Buttler was run out at the non-striker's end by Punjab captain R Ashwin after the Rajasthan opener had left his crease before the delivery. The incident took place during the sixth ball of the 13th over of Rajasthan's 185-run chase in Jaipur.

However, not many are aware of what mankaded means and where did the term originate from?

The rule and name 'mankaded' is given after Indian bowler Vinoo Mankad's name.

Mankad was among the earliest bowlers to run a non-striker out. The incident dates back to 13 December 1947 during India's tour to Australia.

In one of the game, Mankad had run out former Australia cricketer Bill Brown, who played 22 Tests between 1934 and 1948, when Brown had left the crease before Mankad delivered the ball.

Back then, Mankad faced a lot of criticism from the Australian media but legendary Australian player and the then captain, Don Bradman had defended the India player.

As per several reports, Bradman had questioned why Mankad's sportsmanship is being questioned as the laws of cricket make it quite clear that the non-striker must keep within his ground until the ball has been delivered.

While there have been many instances of mankading but it was during the 12th edition of the IPL that the rule gained the heat.

Ashwin, who had mankaded Buttler, immediately appealed for the wicket and the on-field umpire immediately signalled for the decision to be taken by the third umpire, who decided to give Buttler out.

That was the changing point for Rajasthan as the hosts stumbled and kept losing wickets, eventually losing the game to Punjab by 14 runs.