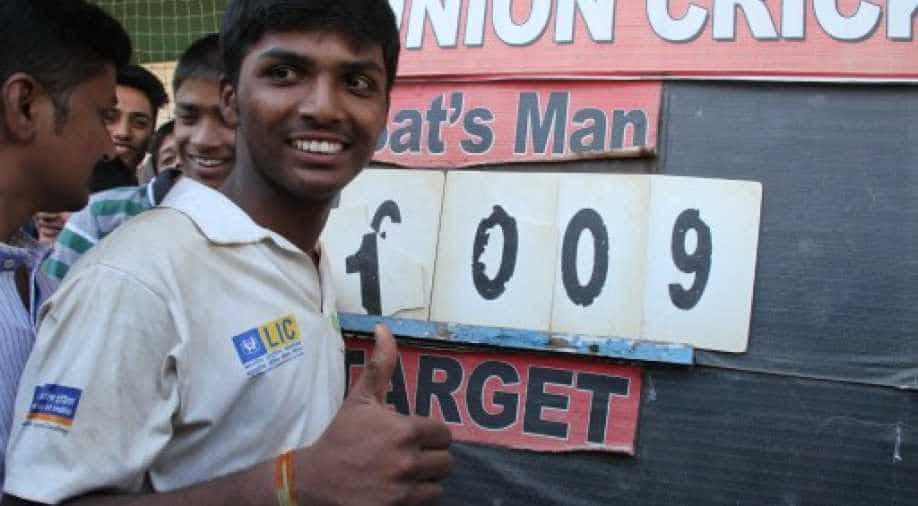 Mumbai schoolboy Pranav Dhanawade, 15, poses next to the score board after smashing a 117-year-old record for the highest number of runs scored in one innings in Mumbai on January 5, 2016. Photograph:( AFP )

A junior Mumbai cricketer was detained by the police for not vacating the ground that was to be used as a helipad for senior minister Prakash Javadekar's chopper to touch down on.

Sixteen-year-old Pranav Dhanawade, who had made news for scoring 1,009 runs in a school match, said they were playing at Subhash Maidan when he was detained by the police.

"We requested them to allow us to play for a little longer. We were in the last stage of our practice. But they (the police) didn't leave and got abusive," Dhanawade said.

Dhanawade's family said he was taken to the nearest police station and made to wait for hours before his father had to come and rescue him. His father clarified he was not put in a lock up, NDTV reported.

Police said the ground had to be evacuated for security reasons.

Meanwhile, Javadekar, whose helicopter was to touch down on Subhash Maidan, told Press Trust of India -- an Indian media agency -- that he would be taking the road to reach Mumbai.

Dhanawade had made news earlier this year when he beccame the first batsman to score a four-digit score in all forms of game. Playing for his school KC Gandhi High School against Arya Gurukul in January 5 and 6, he scored a staggering 1,009 runs in a single innings to surpass the previous highest score of 628 made by an English schoolboy AEJ Collins way back in 1899.